Do you work in the field of business or investment, or in any work related to advertising and marketing !. This is the bottom line of today’s page. Quotations on about Advertising and Inspirational sayings in pictures. 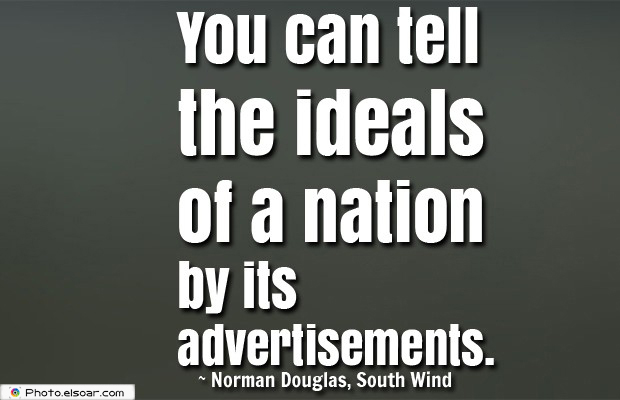 You can tell the ideals of a nation by its advertisements. ~ Norman Douglas – South Wind 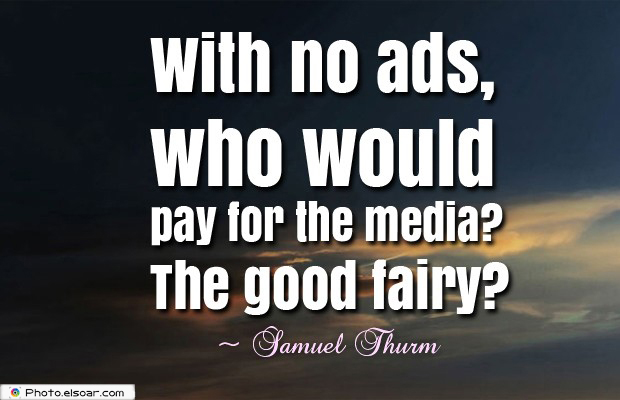 With no ads, who would pay for the media? The good fairy? ~ Samuel Thurm 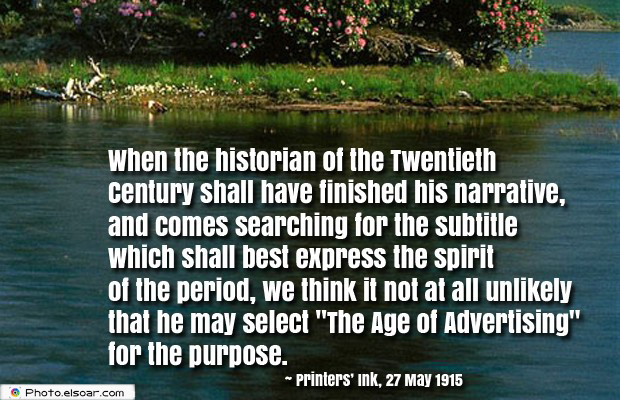 When the historian of the Twentieth Century shall have finished his narrative, and comes searching for the subtitle which shall best express the spirit of the period, we think it not at all unlikely that he may select “The Age of Advertising” for the purpose. ~ Printers’ Ink – 27 May 1915 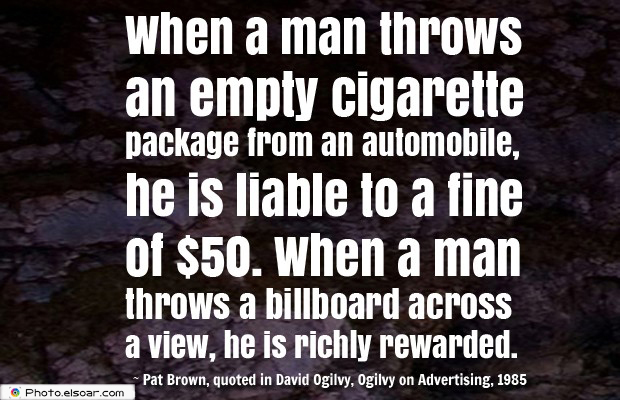 When a man throws an empty cigarette package from an automobile, he is liable to a fine of $50. When a man throws a billboard across a view, he is richly rewarded. ~ Pat Brown – quoted in David Ogilvy, Ogilvy on Advertising, 1985 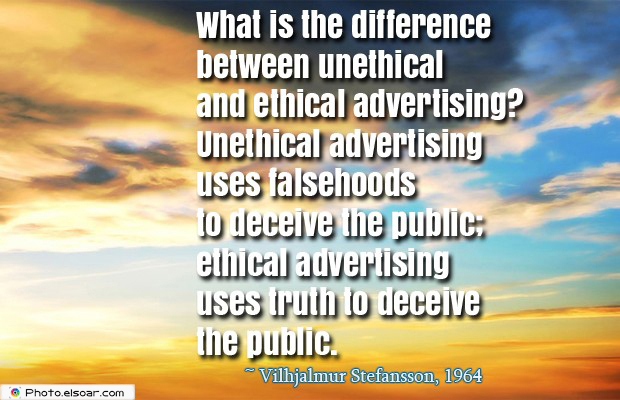 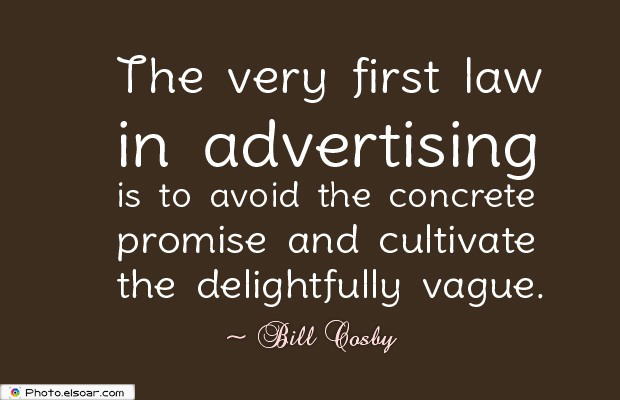 The very first law in advertising is to avoid the concrete promise and cultivate the delightfully vague. ~ Bill Cosby 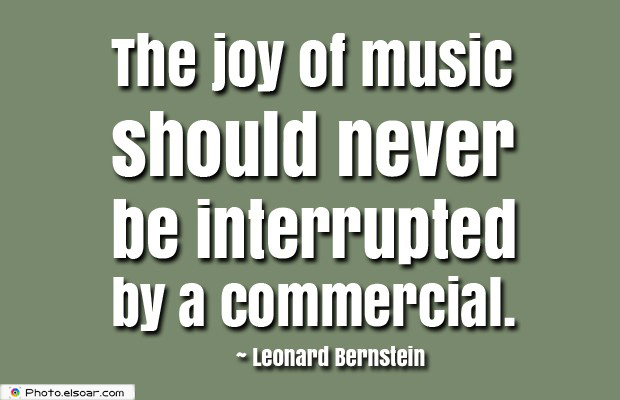 The joy of music should never be interrupted by a commercial. ~ Leonard Bernstein

So long as there’s a jingle in your head, television isn’t free. ~ Jason Love 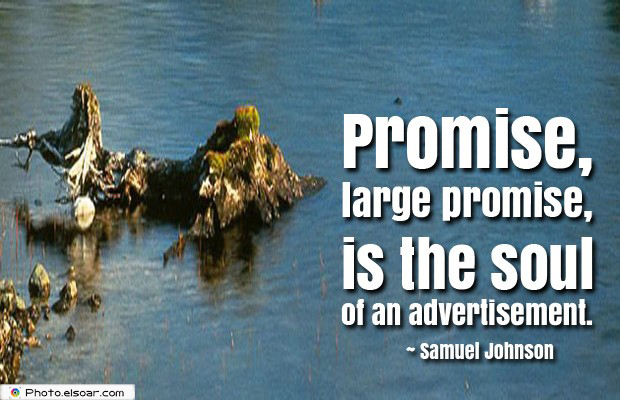 Promise, large promise, is the soul of an advertisement. ~ Samuel Johnson

Our society’s values are being corrupted by advertising’s insistence on the equation: Youth equals popularity, popularity equals success, success equals happiness. ~ John Fisher – The Plot to Make You Buy, 1968 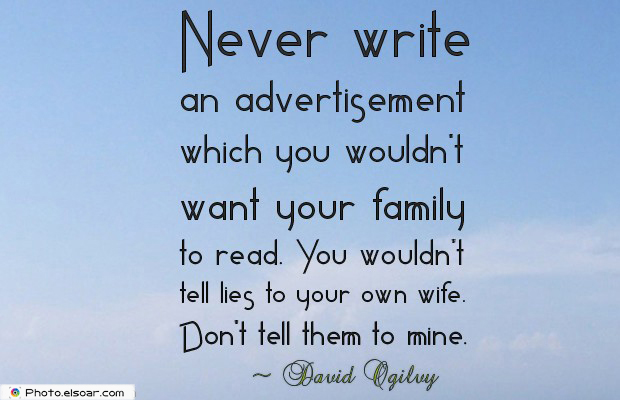 Never write an advertisement which you wouldn’t want your family to read. You wouldn’t tell lies to your own wife. Don’t tell them to mine. ~ David Ogilvy 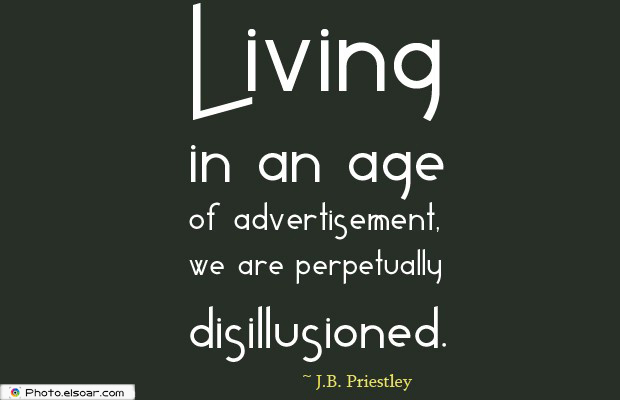 Living in an age of advertisement, we are perpetually disillusioned. ~ J.B. Priestley 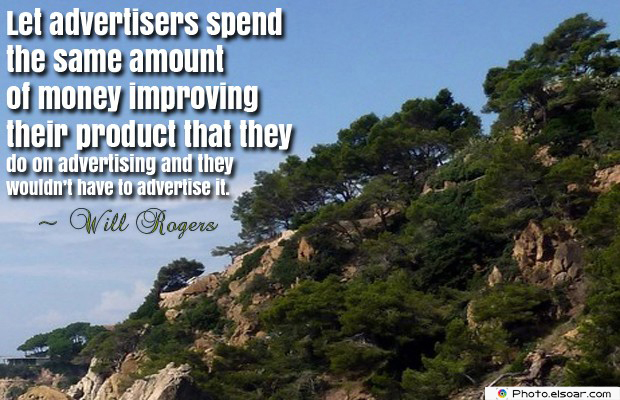 Let advertisers spend the same amount of money improving their product that they do on advertising and they wouldn’t have to advertise it. ~ Will Rogers 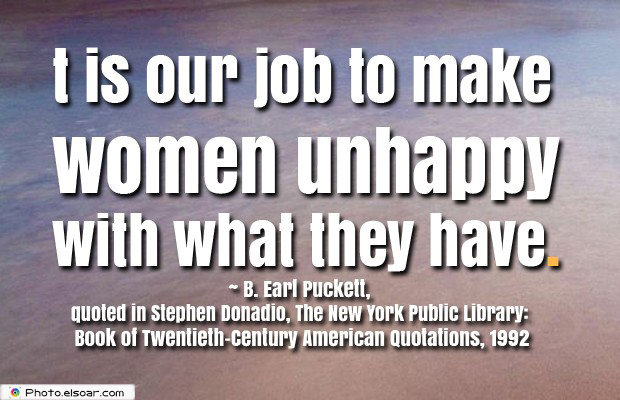 It is our job to make women unhappy with what they have. ~ B. Earl Puckett – quoted in Stephen Donadio, The New York Public Library: Book of Twentieth-Century American Quotations, 1992 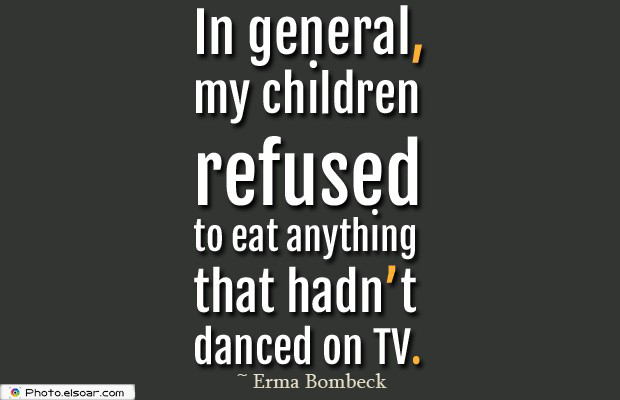 In general, my children refused to eat anything that hadn’t danced on TV. ~ Erma Bombeck

If you don’t find it in the index, look very carefully through the entire catalogue. ~ Sears – Roebuck, and Co. Consumer’s Guide, 1897 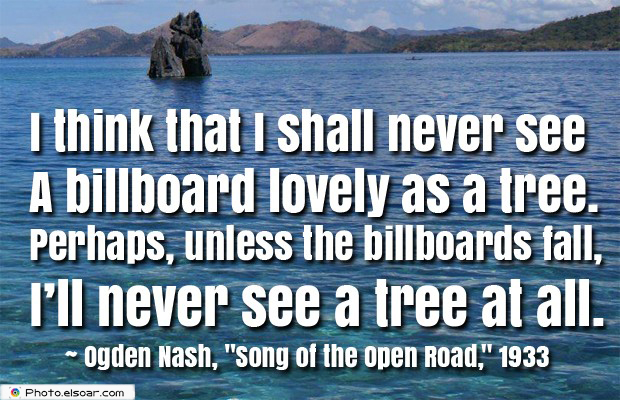 I think that I shall never see
A billboard lovely as a tree.
Perhaps, unless the billboards fall,
I’ll never see a tree at all. ~ Ogden Nash – “Song of the Open Road,” 1933 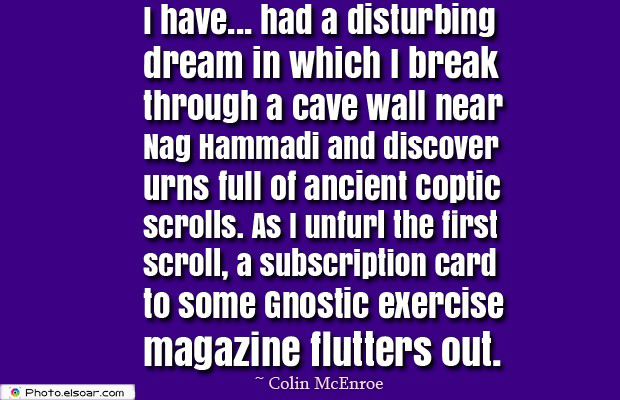 I have… had a disturbing dream in which I break through a cave wall near Nag Hammadi and discover urns full of ancient Coptic scrolls. As I unfurl the first scroll, a subscription card to some Gnostic exercise magazine flutters out. ~ Colin McEnroe 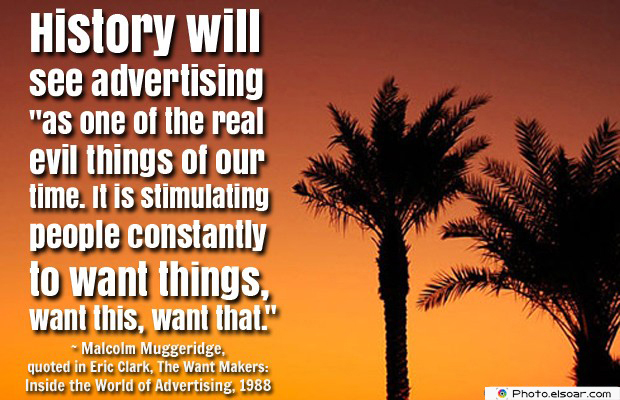 History will see advertising “as one of the real evil things of our time. It is stimulating people constantly to want things, want this, want that.” ~ Malcolm Muggeridge – quoted in Eric Clark, The Want Makers: Inside the World of Advertising, 1988

Don’t tell my mother I work in an advertising agency — she thinks I play piano in a whorehouse. ~ Jacques Seguela

And there is no question but that you can’t sustain a mood, a dramatic mood of any particular kind, when at the end of the climactic moment of the scene, out come a couple of dancing rabbits with toilet paper. ~Rod Serling, quoted in Teaching Literature to Adolescents: Plays by Alan B. Howes, 1968; various wordings exist, including “How can you put on a meaningful drama or documentary that is adult, incisive, probing, when every fifteen minutes the proceedings are interrupted by twelve dancing rabbits singing about toilet paper?” ~ Rod Serling – speech at Ithaca College (New York), quoted in Reader’s Digest, vol.121, 1982 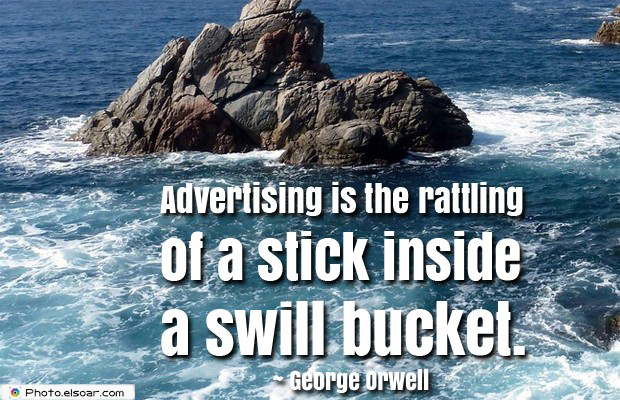 Advertising is the rattling of a stick inside a swill bucket. ~ George Orwell 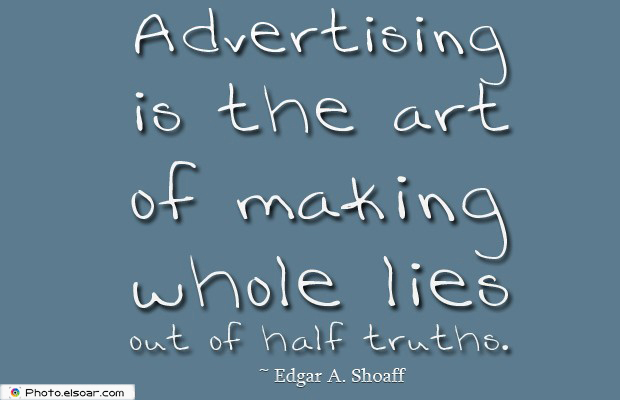 Advertising is the art of making whole lies out of half truths. ~ Edgar A. Shoaff 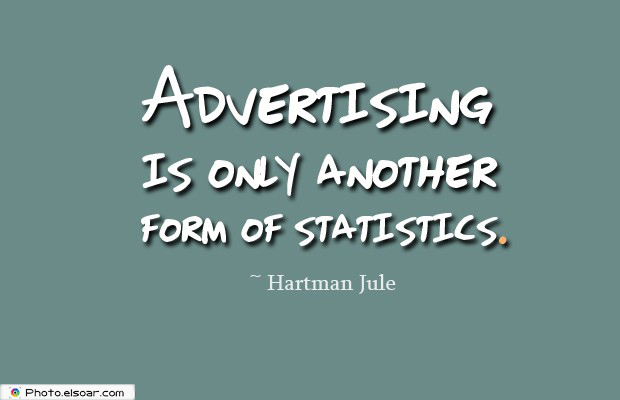 Advertising is only another form of statistics. ~ Hartman Jule 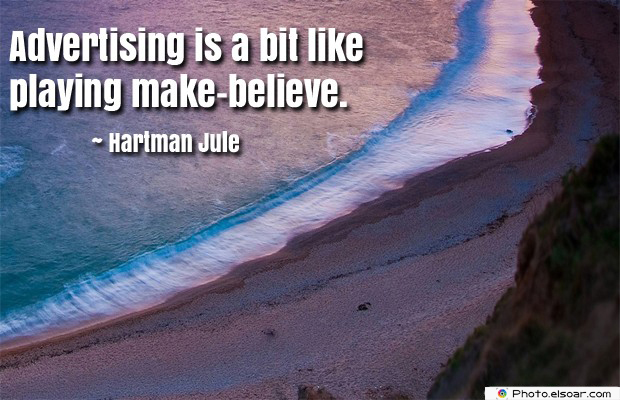 Advertising is a bit like playing make-believe. ~ Hartman Jule 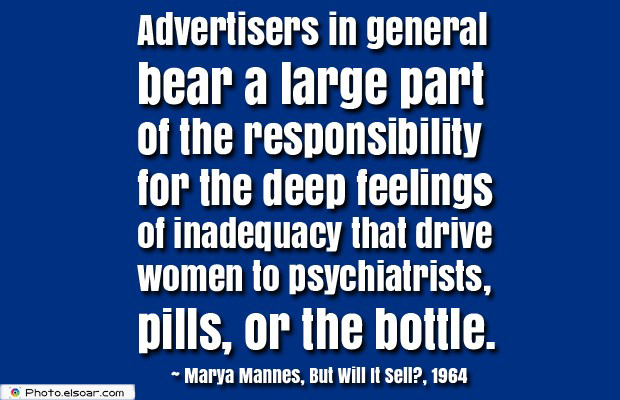 Advertisers in general bear a large part of the responsibility for the deep feelings of inadequacy that drive women to psychiatrists, pills, or the bottle. ~ Marya Mannes – But Will It Sell?, 1964 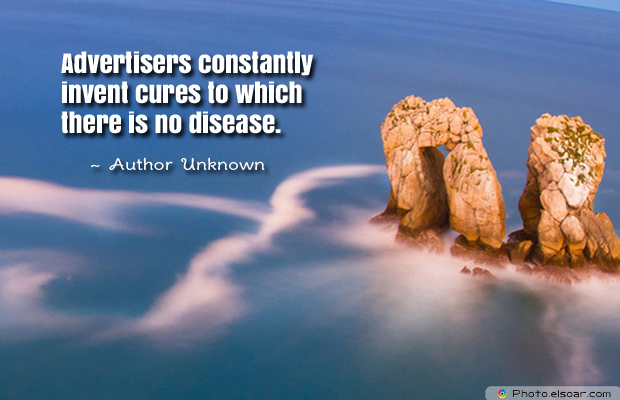 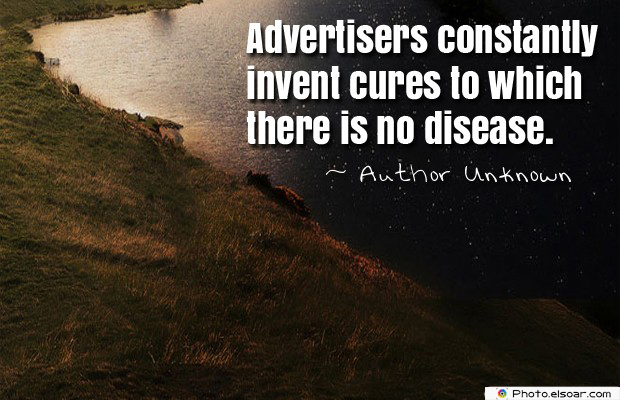 Advertisers constantly invent cures to which there is no disease. ~ Author Unknown 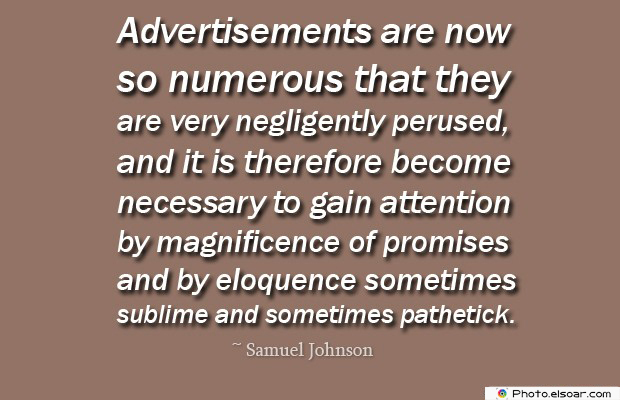 Advertisements are now so numerous that they are very negligently perused, and it is therefore become necessary to gain attention by magnificence of promises and by eloquence sometimes sublime and sometimes pathetick. ~ Samuel Johnson