More courage and courage to spend some hours or days in camping. But there are many other aspects that we should see in camping.

like what? Such as quotations and inspirational sayings that we should read. 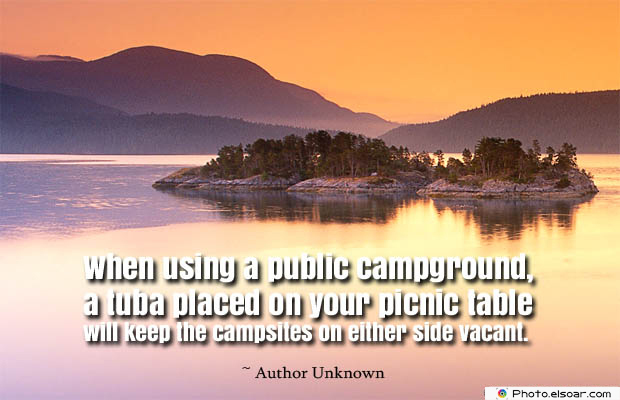 When using a public campground, a tuba placed on your picnic table will keep the campsites on either side vacant. ~ Author Unknown 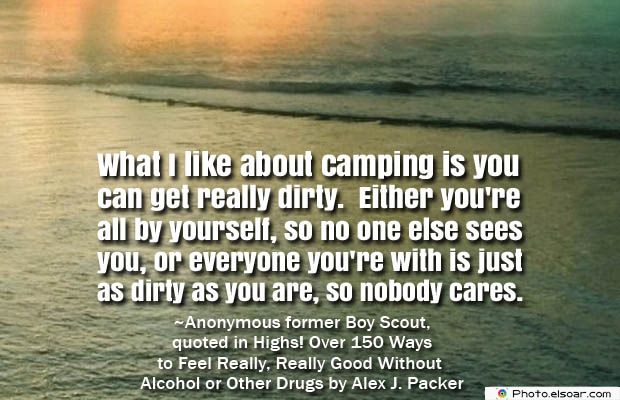 What I like about camping is you can get really dirty. Either you’re all by yourself, so no one else sees you, or everyone you’re with is just as dirty as you are, so nobody cares. ~ Anonymous former Boy Scout, quoted in Highs! Over 150 Ways to Feel Really, Really Good Without Alcohol or Other Drugs by Alex J. Packer 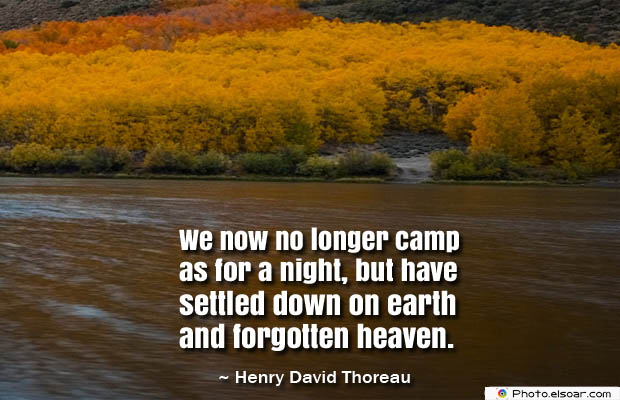 We now no longer camp as for a night, but have settled down on earth and forgotten heaven. ~ Henry David Thoreau 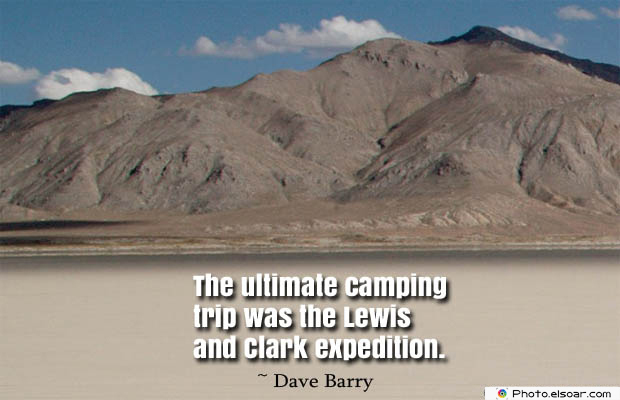 The ultimate camping trip was the Lewis and Clark expedition. ~ Dave Barry 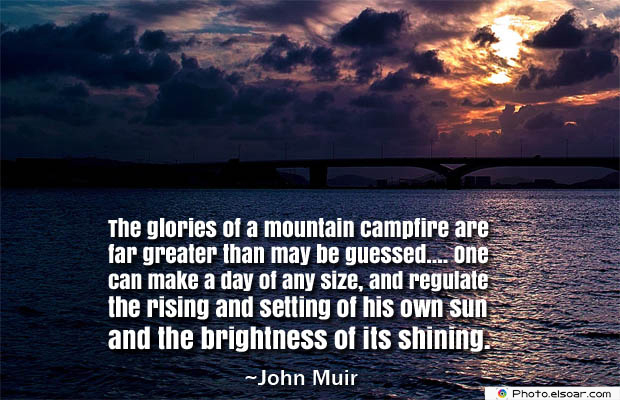 The glories of a mountain campfire are far greater than may be guessed…. One can make a day of any size, and regulate the rising and setting of his own sun and the brightness of its shining. ~ John Muir 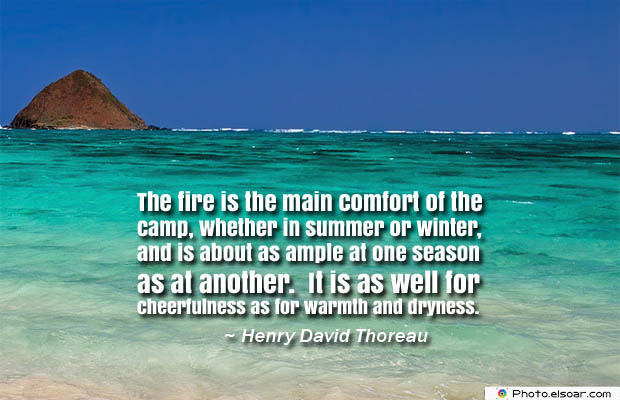 The fire is the main comfort of the camp, whether in summer or winter, and is about as ample at one season as at another. It is as well for cheerfulness as for warmth and dryness. ~ Henry David Thoreau 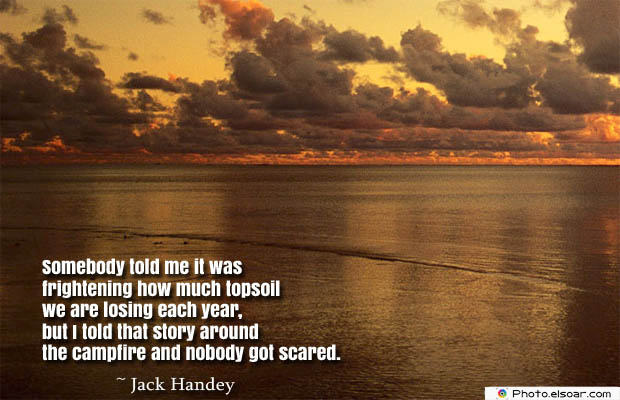 Somebody told me it was frightening how much topsoil we are losing each year, but I told that story around the campfire and nobody got scared. ~ Jack Handey 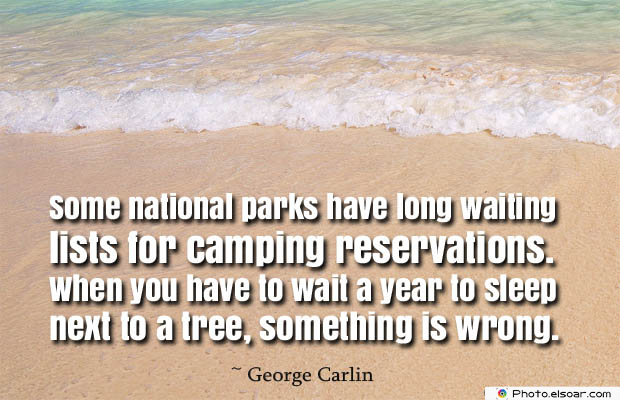 Some national parks have long waiting lists for camping reservations. When you have to wait a year to sleep next to a tree, something is wrong. ~ George Carlin 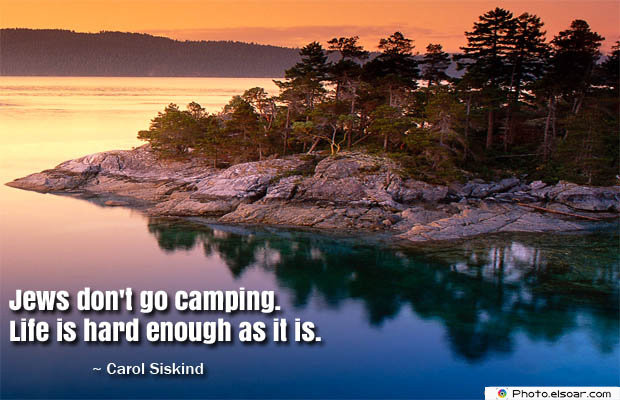 Jews don’t go camping. Life is hard enough as it is. ~ Carol Siskind 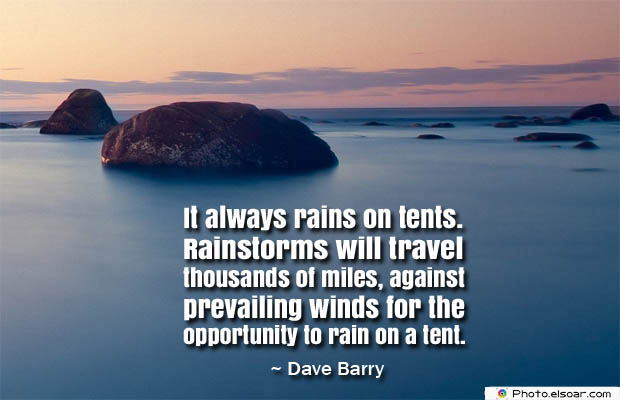 It always rains on tents. Rainstorms will travel thousands of miles, against prevailing winds for the opportunity to rain on a tent. ~ Dave Barry 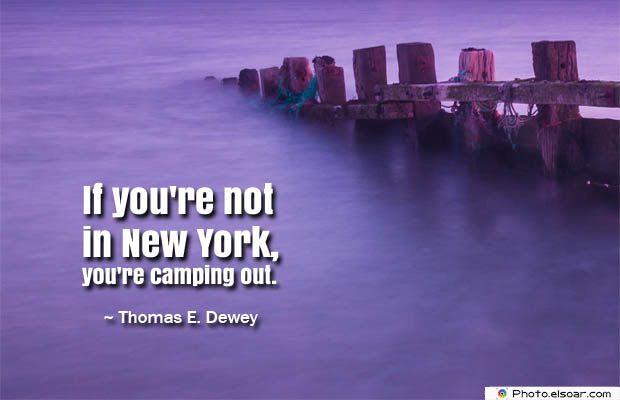 If you’re not in New York, you’re camping out. ~ Thomas E. Dewey 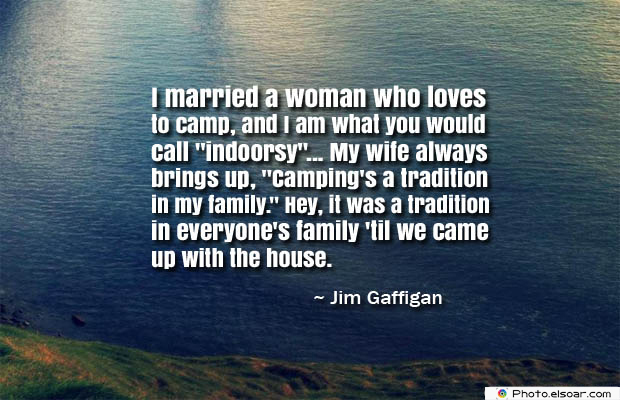 I married a woman who loves to camp, and I am what you would call “indoorsy”… My wife always brings up, “Camping’s a tradition in my family.” Hey, it was a tradition in everyone’s family ’til we came up with the house. ~ Jim Gaffigan 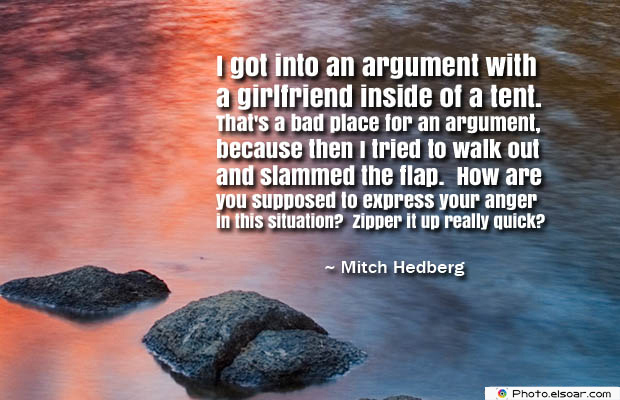 I got into an argument with a girlfriend inside of a tent. That’s a bad place for an argument, because then I tried to walk out and slammed the flap. How are you supposed to express your anger in this situation? Zipper it up really quick? ~ Mitch Hedberg 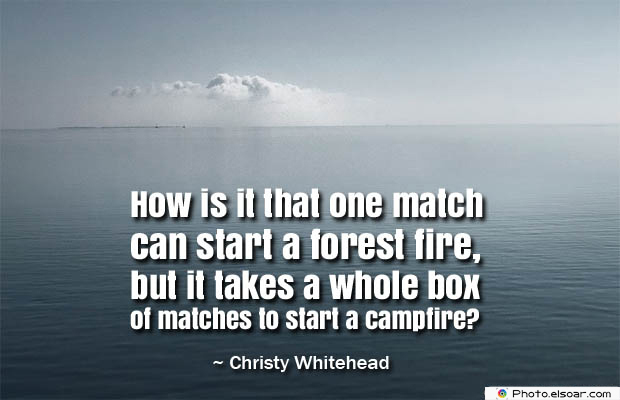 How is it that one match can start a forest fire, but it takes a whole box of matches to start a campfire? ~ Christy Whitehead 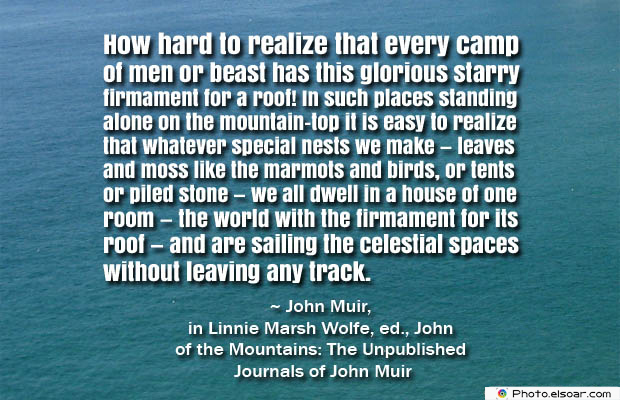 How hard to realize that every camp of men or beast has this glorious starry firmament for a roof! In such places standing alone on the mountain-top it is easy to realize that whatever special nests we make — leaves and moss like the marmots and birds, or tents or piled stone — we all dwell in a house of one room — the world with the firmament for its roof — and are sailing the celestial spaces without leaving any track. ~ John Muir – in Linnie Marsh Wolfe, ed., John of the Mountains: The Unpublished Journals of John Muir 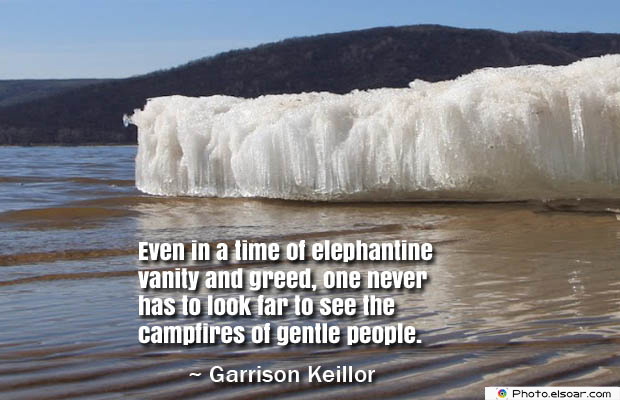 Even in a time of elephantine vanity and greed, one never has to look far to see the campfires of gentle people. ~ Garrison Keillor 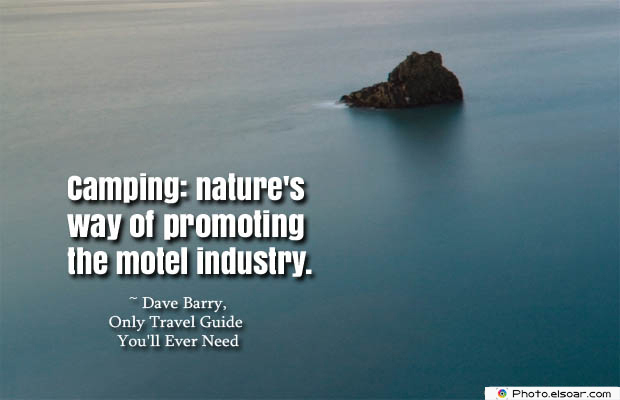 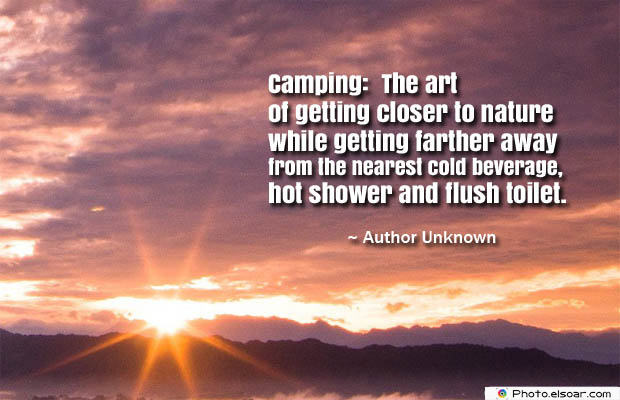 Camping: The art of getting closer to nature while getting farther away from the nearest cold beverage, hot shower and flush toilet. ~ Author Unknown 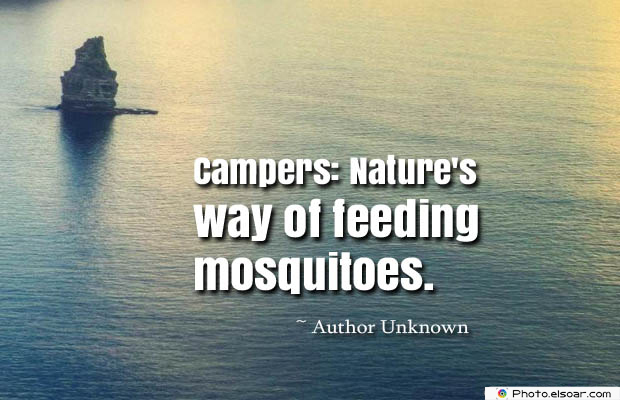 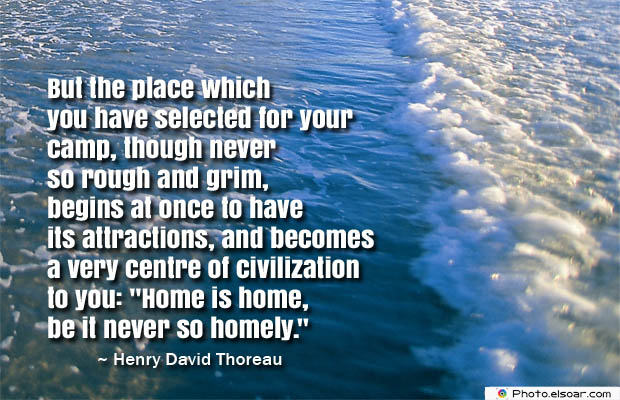 But the place which you have selected for your camp, though never so rough and grim, begins at once to have its attractions, and becomes a very centre of civilization to you: “Home is home, be it never so homely.” ~ Henry David Thoreau 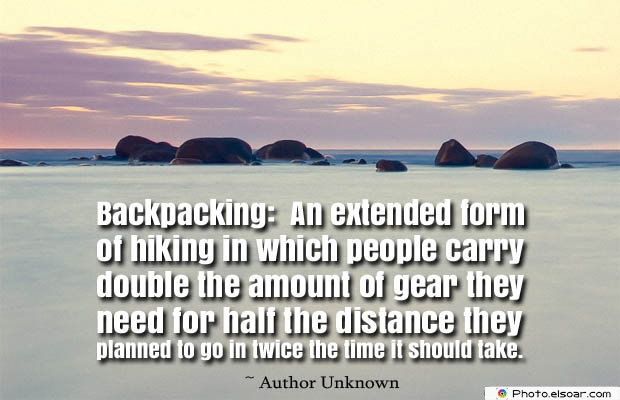 Backpacking: An extended form of hiking in which people carry double the amount of gear they need for half the distance they planned to go in twice the time it should take. ~ Author Unknown 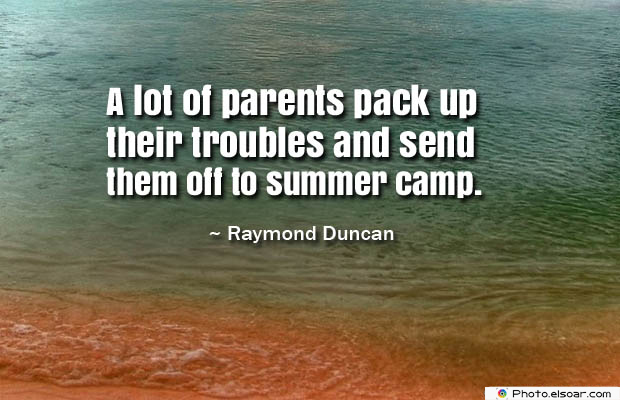 A lot of parents pack up their troubles and send them off to summer camp. ~ Raymond Duncan