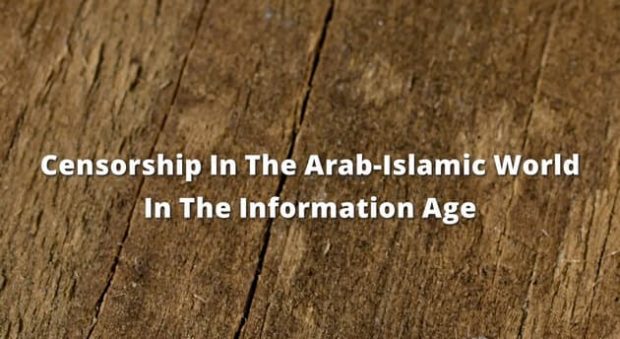 Without a doubt, in many societies the issue of censorship is not blatant anymore. But in Arab and Islamic societies, censorship is central to the lives of the people. The governments throughout the Muslim world remain very preoccupied with censorship methods and ways to deprive their peoples of information. They take this debate seriously, using censorship technologies to close their skies, and continue to exercise information monopolies over their peoples.

The Committee to Protect Journalists issued a report last week stating that the continuous quest for censorship and control over media has weakened the official national medias and their credibility in the Arab world. Therefore, citizens in these countries search for information from external sources. So what has happened is that the citizens of most Arab and Muslim countries seek information on their own countries from external sources.

Within this atmosphere, the foreign media provide any type of information and any portrayal of images they want. Furthermore, the curbing of the freedom of expression and the lack of transparency in addressing national matters by state-controlled media distorts the ability of the individual to deal with information. The citizens of the Muslim world are lacking in their abilities to understand information, scrutinize its content and distinguish between what is beneficial and harmful to themselves and their countries.

So the governments are contributing to the creation of handicapped societies. People who are unable to deal with information have no way of understanding their country’s national priorities and cannot engage in public affairs. Nor do they understand their country’s role in the international community. Such kinds of strategies will eventually backfire violently. In the end of the 1980s totalitarianism and communist control over societies led to their explosion.

In most of the Arab and Islamic countries, the theory of elitism is still in practice.

Governments still believe that information should be restricted to the elite while the masses are kept in ignorance. But such practices are not suitable in the era of information technology and international media that know no borders. In fact, the information technology revolution provides both the state and the individual in the Arab-Islamic world with a golden opportunity to close the gap of backwardness and underdevelopment. Transparency, freedom and utilization of information technology would be beneficial to both Arabs and Muslims. It will help in the following ways:

There is an urgent need for the governments in the Arab-Islamic world, as well as the Third World, to make drastic changes in viewing their roles in the new era. The state has to trust its citizens, educate them, make the information available to them, help them analyze and scrutinize information. The state has to reevaluate its polices and make itself more accountable.

Old methods of censorship and political indoctrination are not valid anymore. They can’t stand the technological advancement and challenges of the 21st century. The state has to respond to the wishes of its people and instead of indoctrinating its people oppressively, it should try to convince the people of its agenda, while taking into account dissident opinions. The new era, as Fokoyama put it, is influenced heavily by information technology. These technologies heavily influence the status of the state and its role.

Fokoyama said that information technology has changed the world in the following ways: