We all love his country, his city, his village, his homeland. On the other hand, the famous quotations and inspirational sayings about the cities speak, and we are with them.

With description and inspiration we learn more about all of this.

Cities Quotes and Sayings in Images 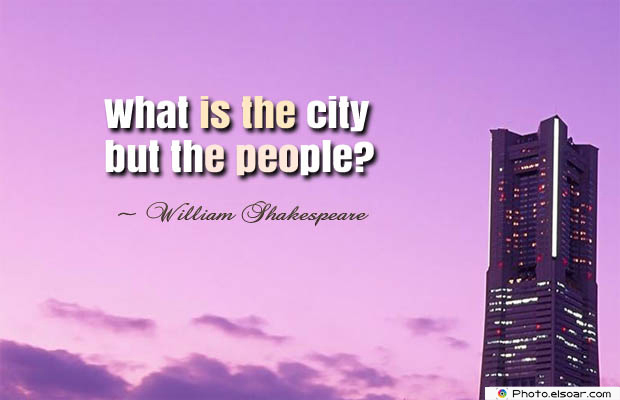 What is the city but the people? ~ William Shakespeare 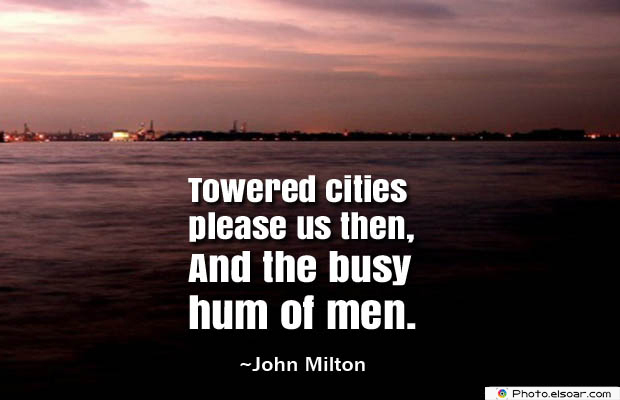 Towered cities please us then,
And the busy hum of men. ~ John Milton 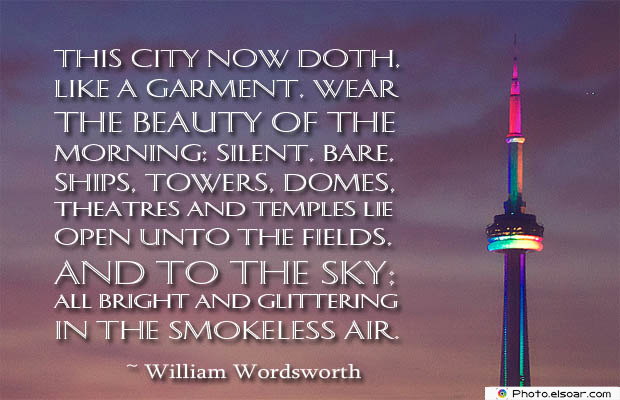 This City now doth, like a garment, wear
The beauty of the morning; silent, bare,
Ships, towers, domes, theatres and temples lie
Open unto the fields, and to the sky;
All bright and glittering in the smokeless air. ~ William Wordsworth 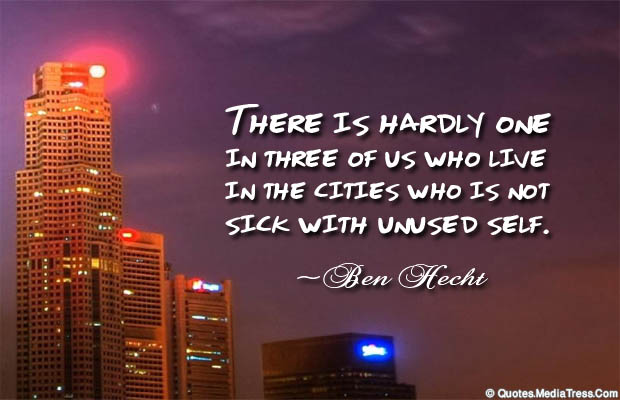 There is hardly one in three of us who live in the cities who is not sick with unused self. ~ Ben Hecht 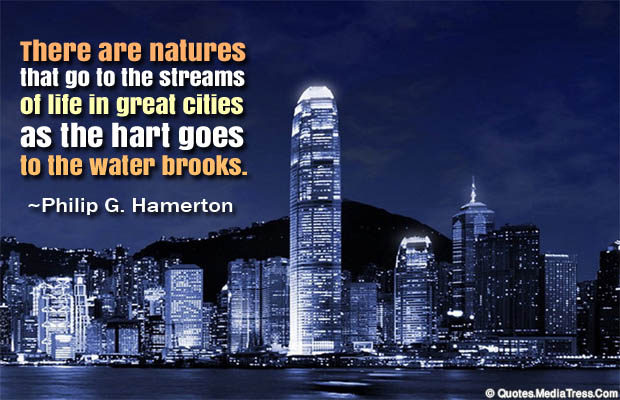 There are natures that go to the streams of life in great cities as the hart goes to the water brooks. ~ Philip G. Hamerton 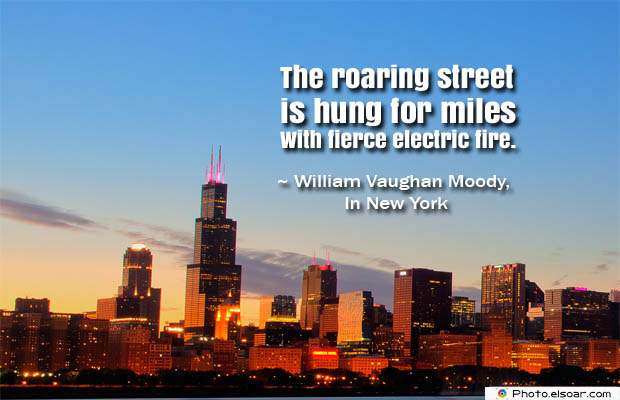 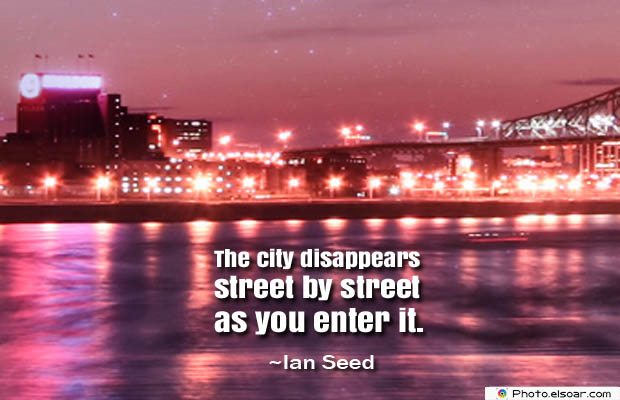 The city disappears street by street as you enter it. ~ Ian Seed 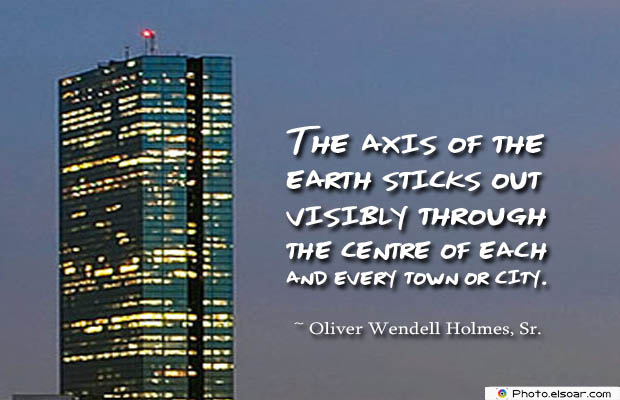 The axis of the earth sticks out visibly through the centre of each and every town or city. ~ Oliver Wendell Holmes, Sr. 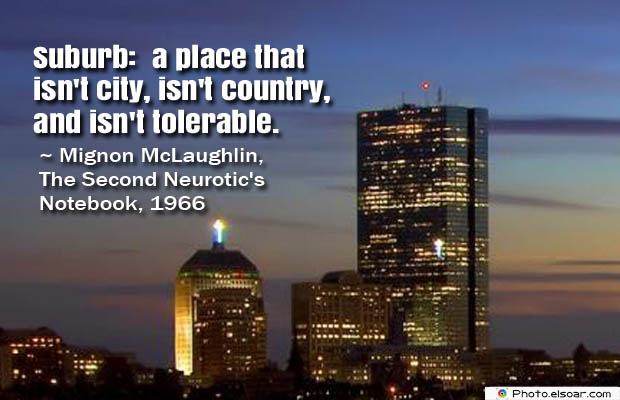 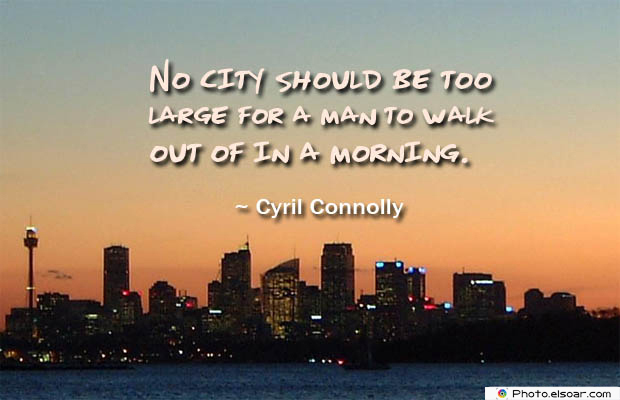 No city should be too large for a man to walk out of in a morning. ~ Cyril Connolly 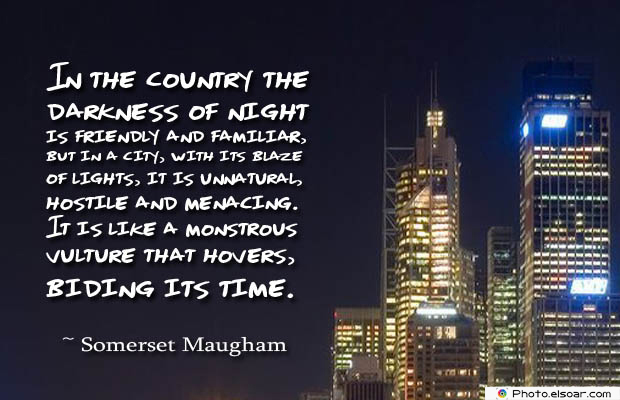 In the country the darkness of night is friendly and familiar, but in a city, with its blaze of lights, it is unnatural, hostile and menacing. It is like a monstrous vulture that hovers, biding its time. ~ Somerset Maugham 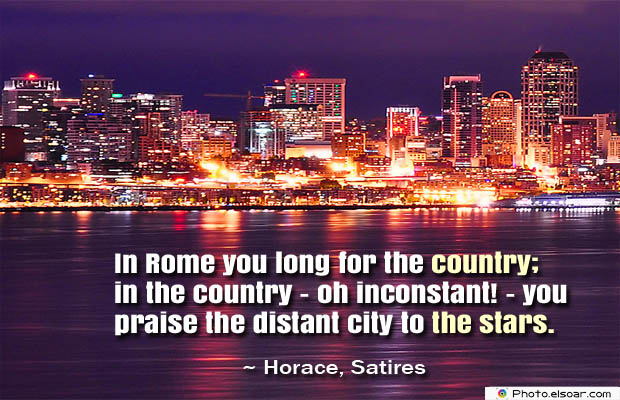 In Rome you long for the country; in the country – oh inconstant! – you praise the distant city to the stars. ~ Horace – Satires 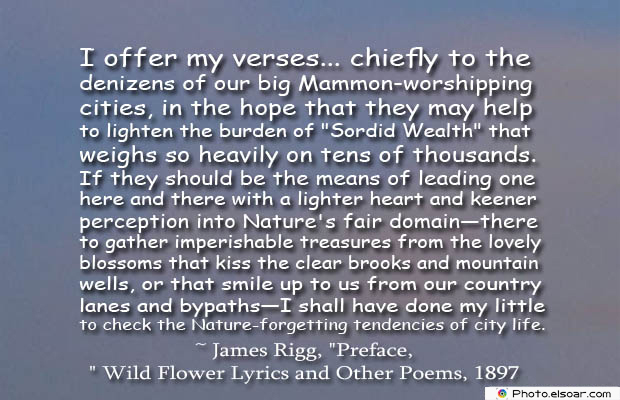 I offer my verses… chiefly to the denizens of our big Mammon-worshipping cities, in the hope that they may help to lighten the burden of “Sordid Wealth” that weighs so heavily on tens of thousands. If they should be the means of leading one here and there with a lighter heart and keener perception into Nature’s fair domain—there to gather imperishable treasures from the lovely blossoms that kiss the clear brooks and mountain wells, or that smile up to us from our country lanes and bypaths—I shall have done my little to check the Nature-forgetting tendencies of city life. ~ James Rigg – “Preface,” Wild Flower Lyrics and Other Poems, 1897 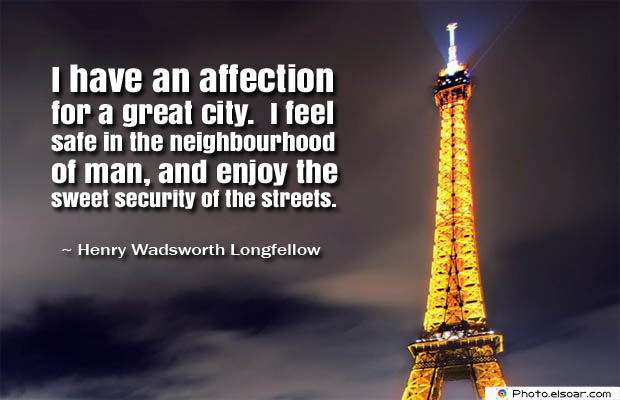 I have an affection for a great city. I feel safe in the neighbourhood of man, and enjoy the sweet security of the streets. ~ Henry Wadsworth Longfellow 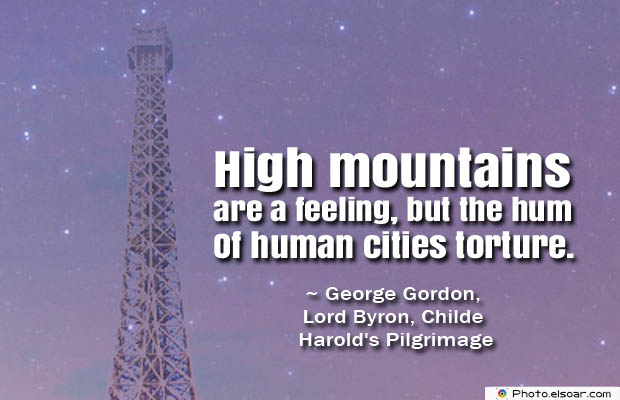 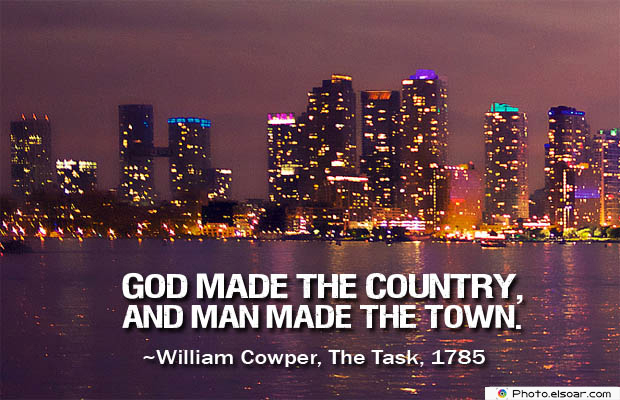 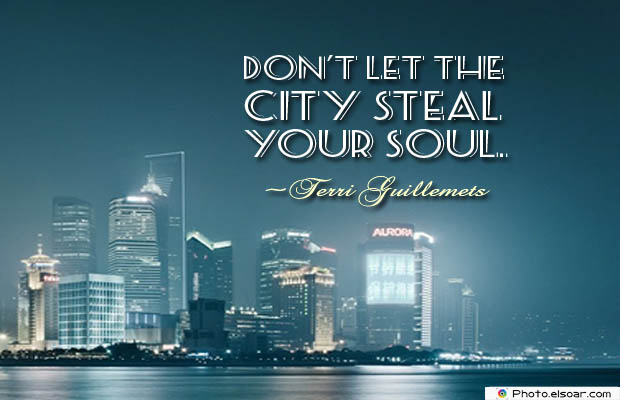 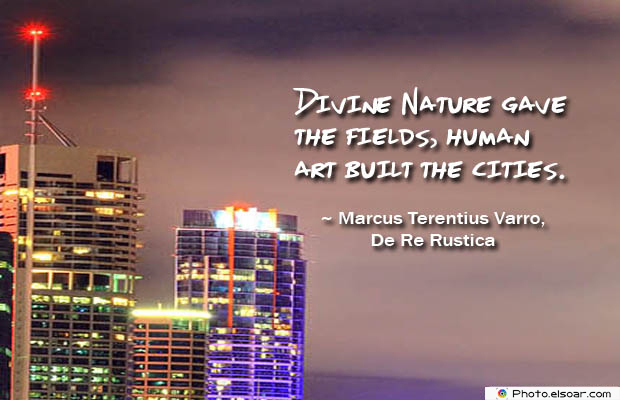 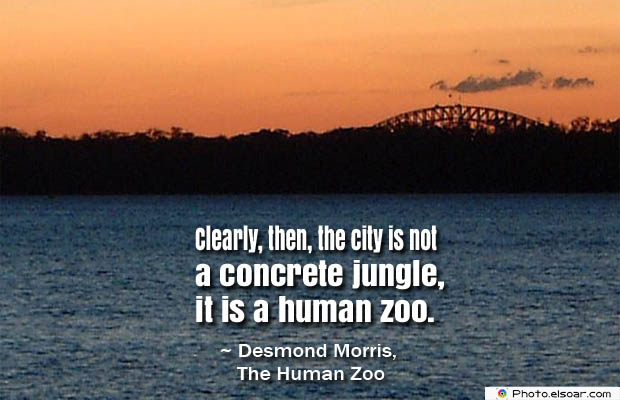 Clearly, then, the city is not a concrete jungle, it is a human zoo. ~ Desmond Morris – The Human Zoo 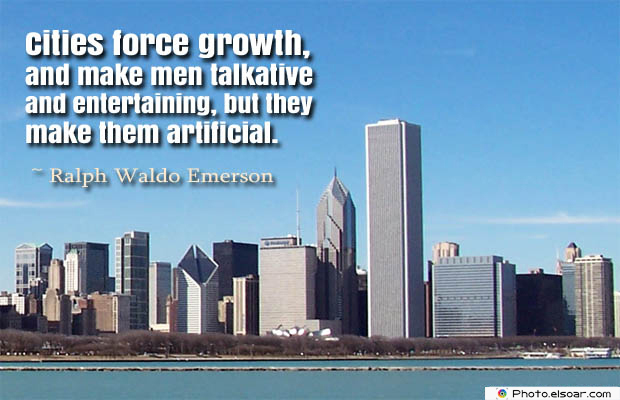 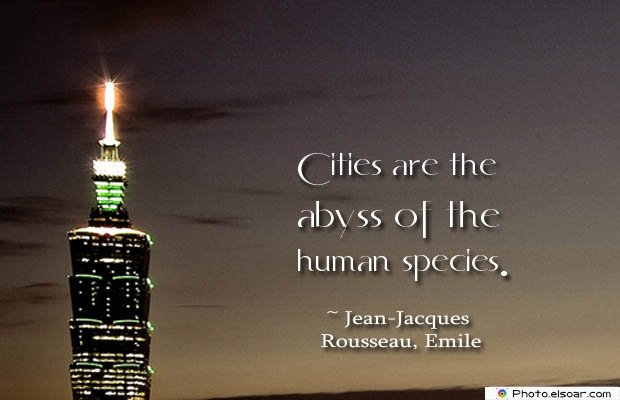 Cities are the abyss of the human species. ~ Jean-Jacques Rousseau – Emile 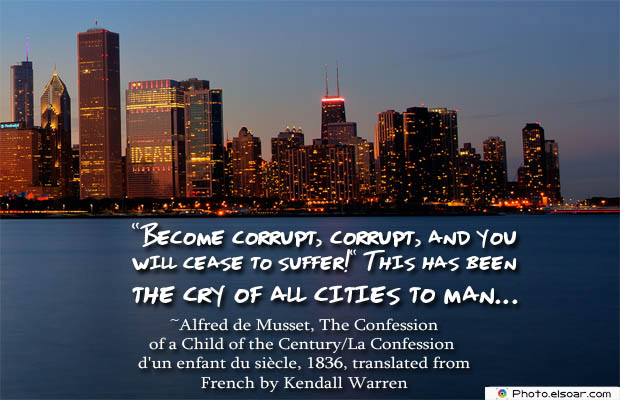 “Become corrupt, corrupt, and you will cease to suffer!” This has been the cry of all cities to man… ~ Alfred de Musset – The Confession of a Child of the Century/La Confession d’un enfant du siècle, 1836, translated from French by Kendall Warren 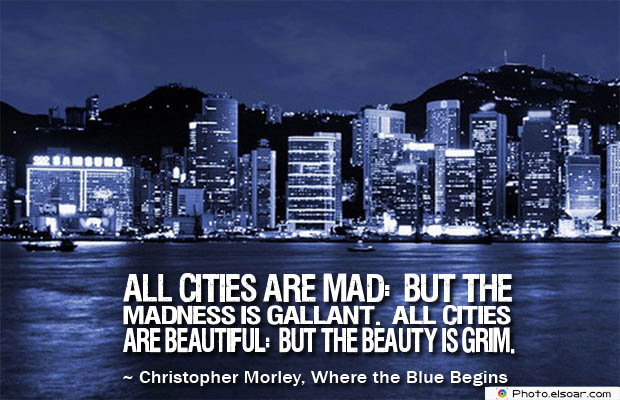 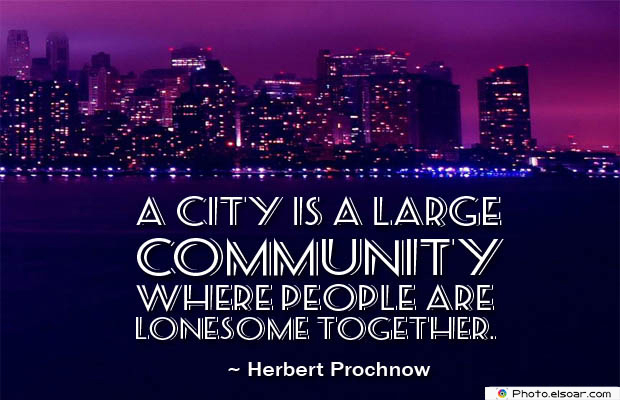 A city is a large community where people are lonesome together. ~ Herbert Prochnow