It’s where we live, it’s Earth, or rather it’s the Earth Day. We have some choices of inspirational quotes and sayings for this event / occasion. 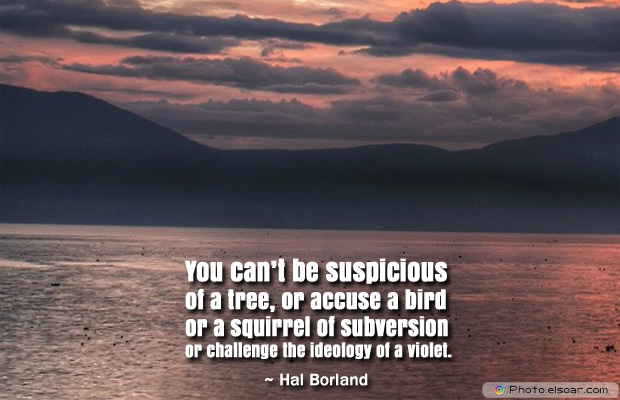 You can’t be suspicious of a tree, or accuse a bird or a squirrel of subversion or challenge the ideology of a violet. ~ Hal Borland – Sundial of the Seasons, 1964 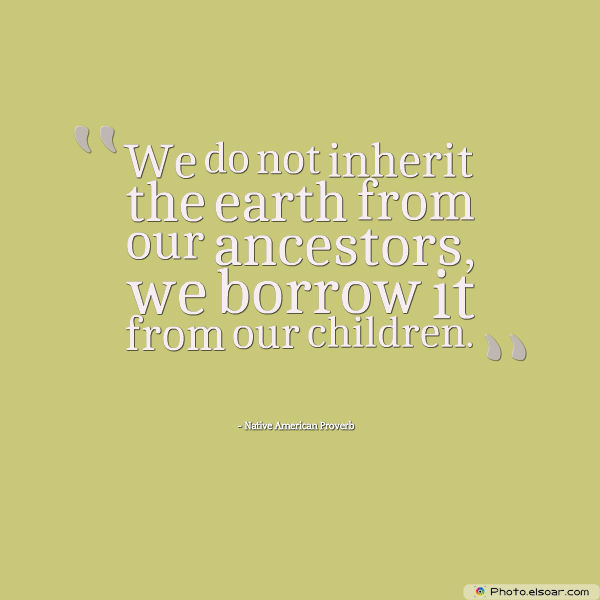 We do not inherit the earth from our ancestors, we borrow it from our children. ~ Native American Proverb 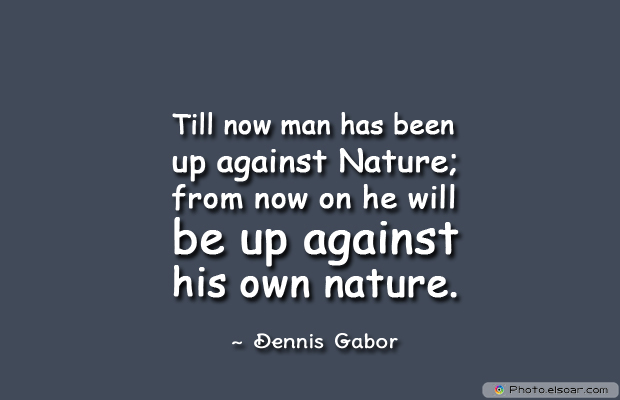 Till now man has been up against Nature; from now on he will be up against his own nature. ~ Dennis Gabor – Inventing the Future, 1963 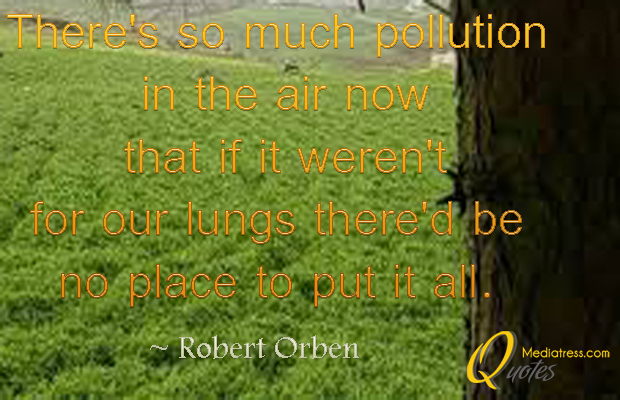 There’s so much pollution in the air now that if it weren’t for our lungs there’d be no place to put it all. ~ Robert Orben 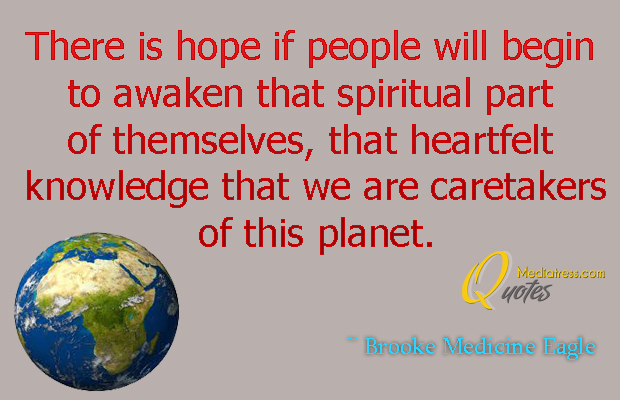 There is hope if people will begin to awaken that spiritual part of themselves, that heartfelt knowledge that we are caretakers of this planet. ~ Brooke Medicine Eagle 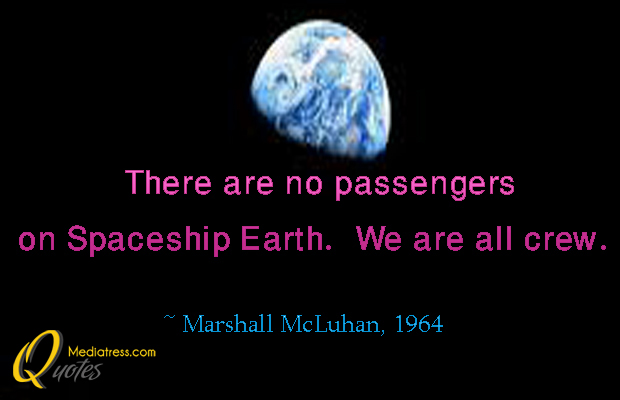 There are no passengers on Spaceship Earth. We are all crew. ~ Marshall McLuhan – 1964 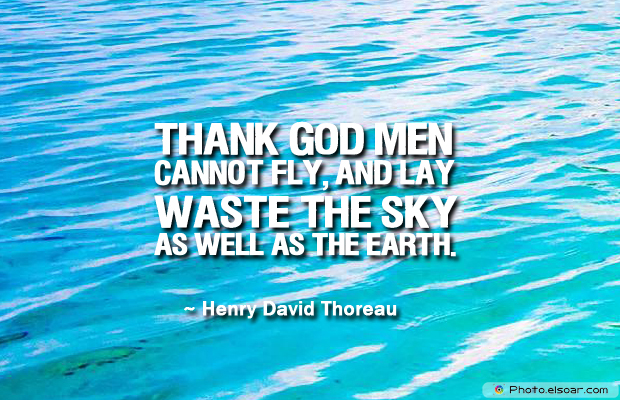 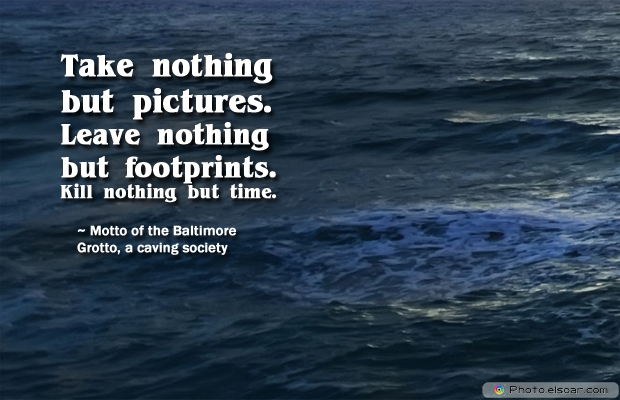 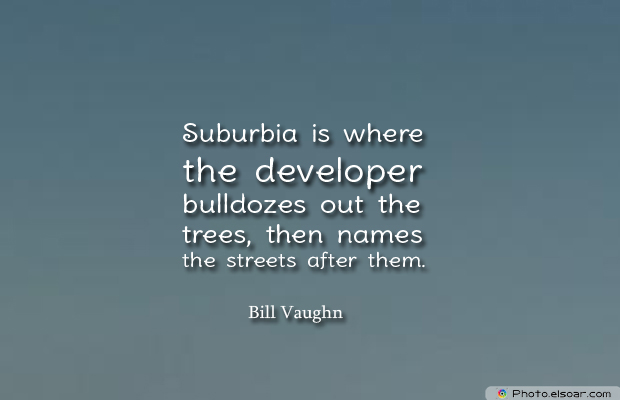 Suburbia is where the developer bulldozes out the trees, then names the streets after them. ~ Bill Vaughn – quoted in Jon Winokur, The Portable Curmudgeon, 1987 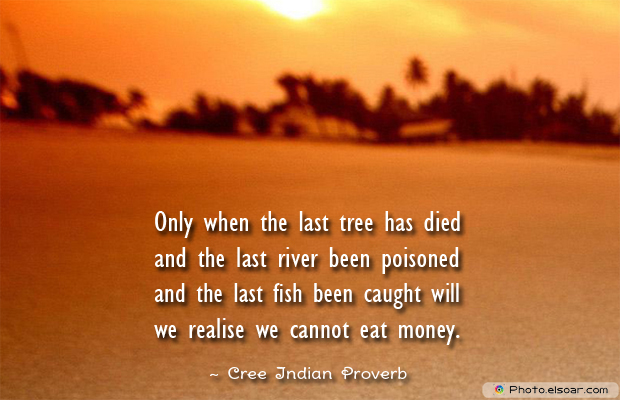 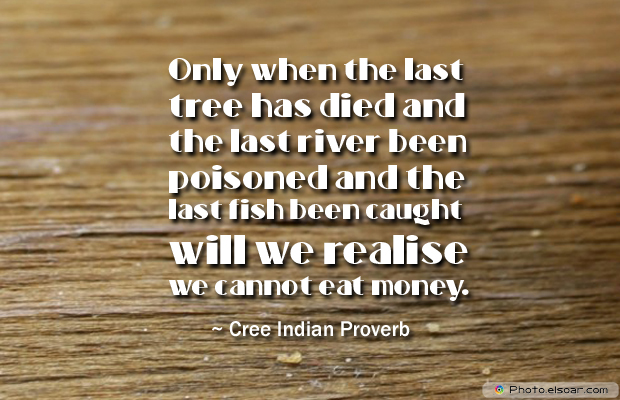 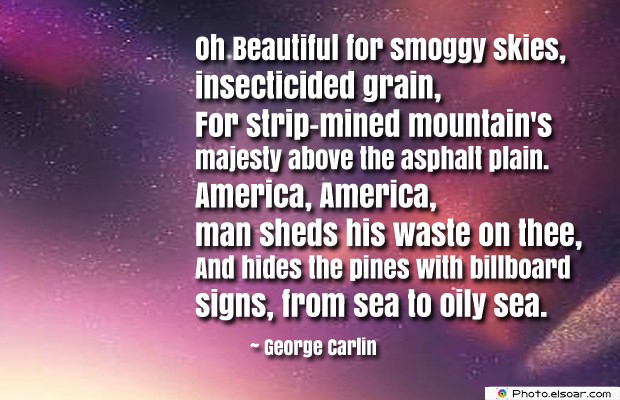 Never does nature say one thing and wisdom another. ~ Juvenal – Satires 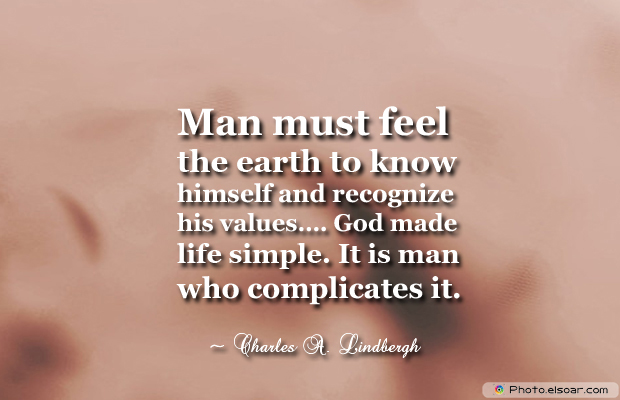 Man must feel the earth to know himself and recognize his values…. God made life simple. It is man who complicates it. ~ Charles A. Lindbergh – Reader’s Digest, July 1972 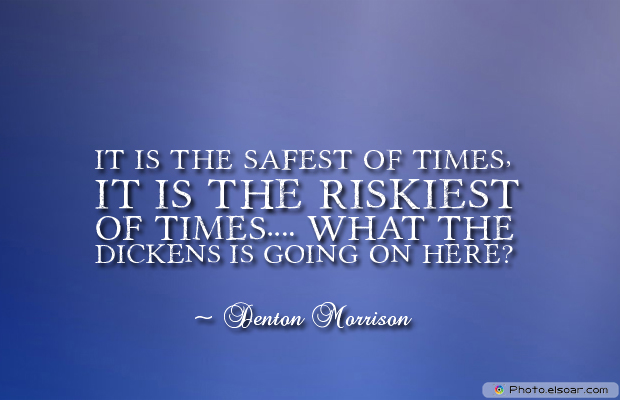 It is the safest of times, it is the riskiest of times…. What the Dickens is going on here? ~ Denton Morrison – on chemicals, technology, and risk, quoted in National Academy of Sciences, Improving Risk Communication, 1989 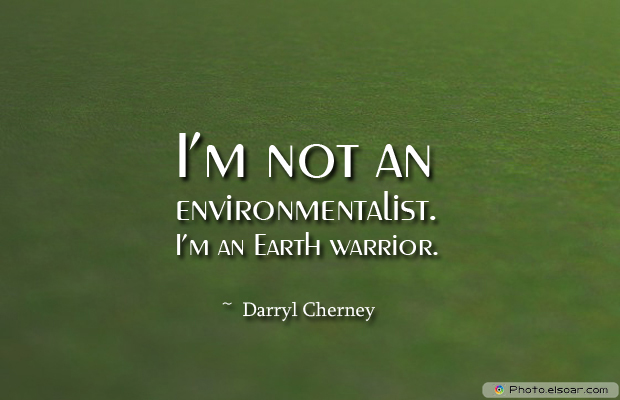 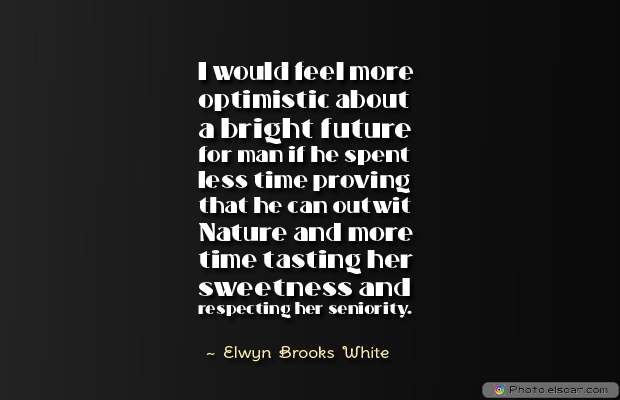 I would feel more optimistic about a bright future for man if he spent less time proving that he can outwit Nature and more time tasting her sweetness and respecting her seniority. ~ Elwyn Brooks White – Essays of E.B. White, 1977 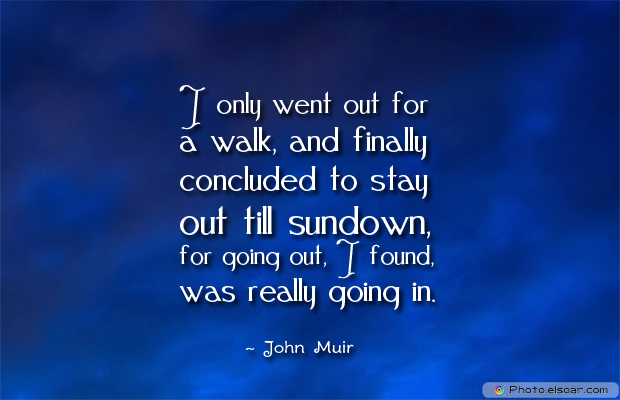 I only went out for a walk, and finally concluded to stay out till sundown, for going out, I found, was really going in. ~ John Muir – 1913, in Linnie Marsh Wolfe, ed., John of the Mountains: The Unpublished Journals of John Muir 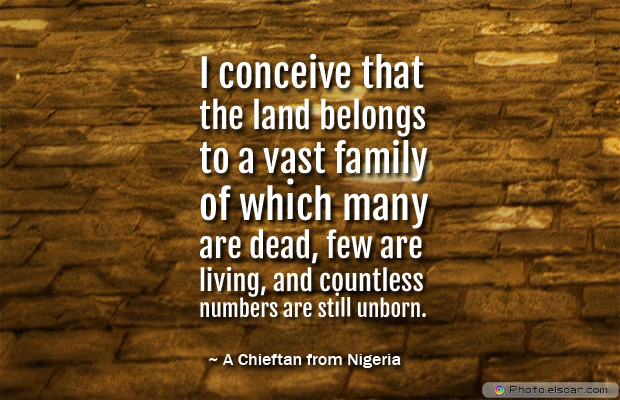 I conceive that the land belongs to a vast family of which many are dead, few are living, and countless numbers are still unborn. ~ A Chieftan from Nigeria 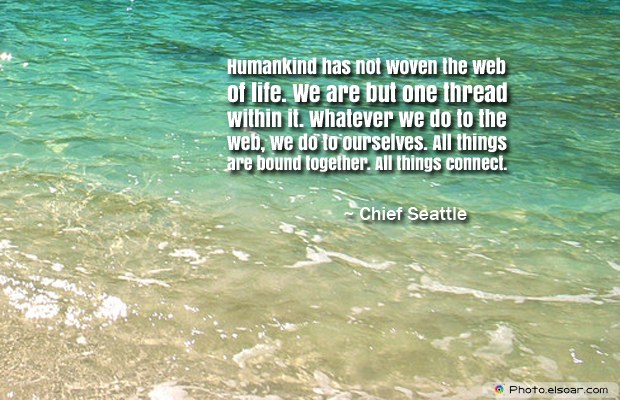 Humankind has not woven the web of life. We are but one thread within it. Whatever we do to the web, we do to ourselves. All things are bound together. All things connect. ~ Chief Seattle – 1855 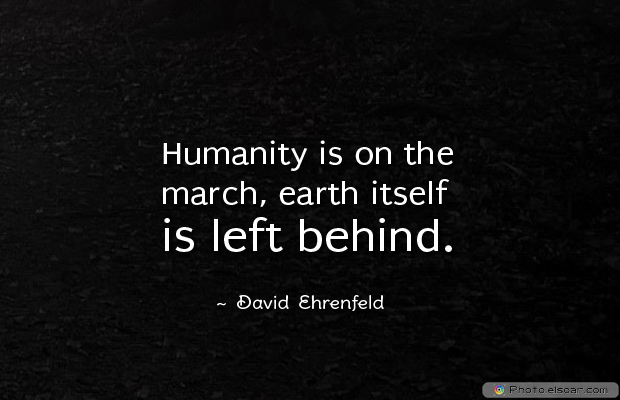 Humanity is on the march, earth itself is left behind. ~ David Ehrenfeld – The Arrogance of Humanism, 1978 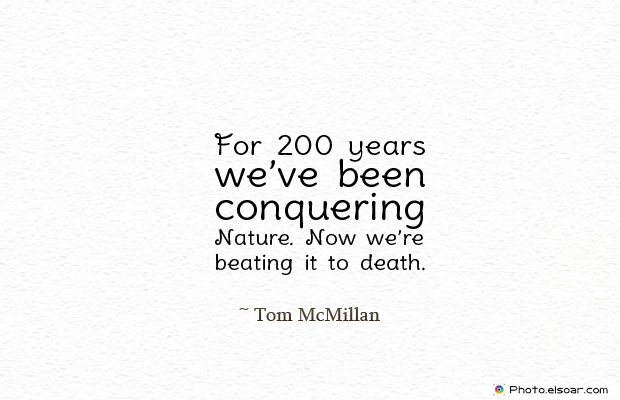 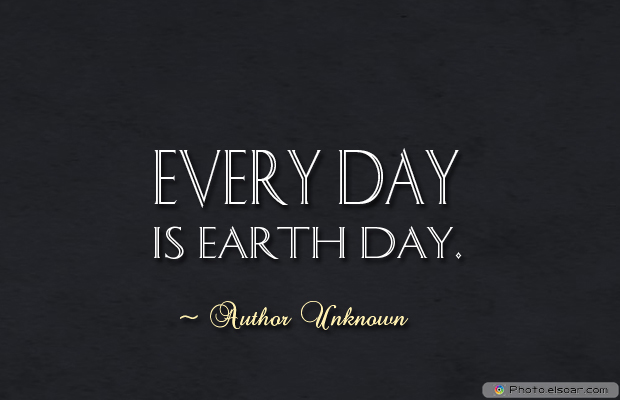 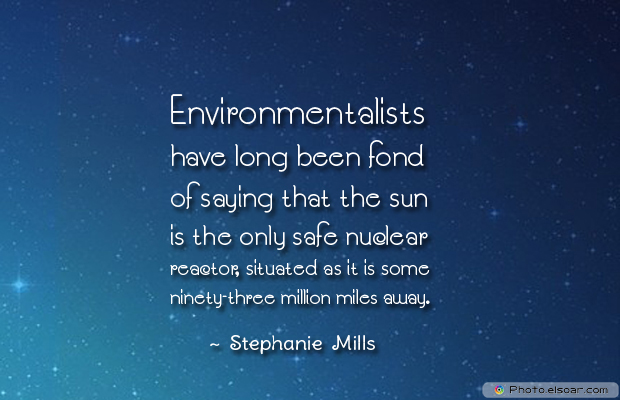 Environmentalists have long been fond of saying that the sun is the only safe nuclear reactor, situated as it is some ninety-three million miles away. ~ Stephanie Mills – ed., In Praise of Nature, 1990 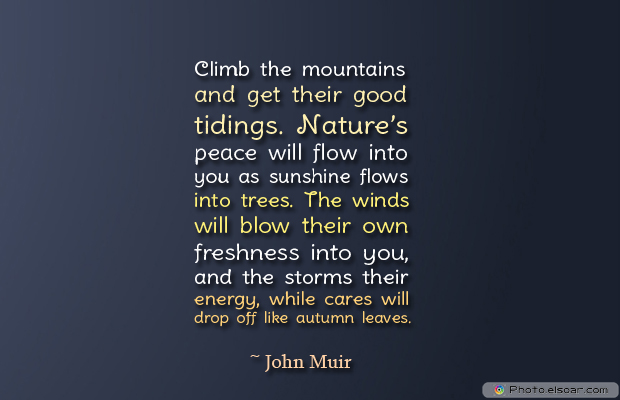 Climb the mountains and get their good tidings. Nature’s peace will flow into you as sunshine flows into trees. The winds will blow their own freshness into you, and the storms their energy, while cares will drop off like autumn leaves. ~ John Muir 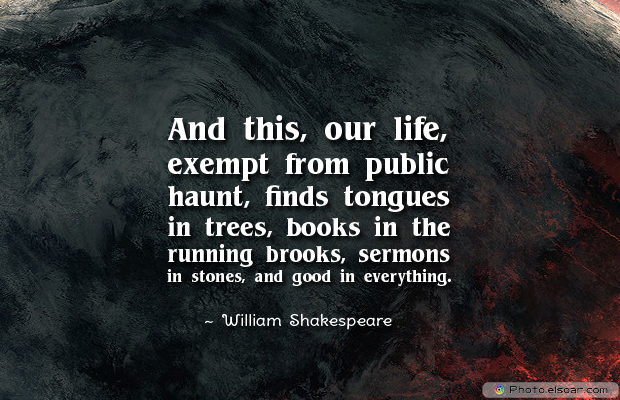 And this, our life, exempt from public haunt, finds tongues in trees, books in the running brooks, sermons in stones, and good in everything. ~ William Shakespeare 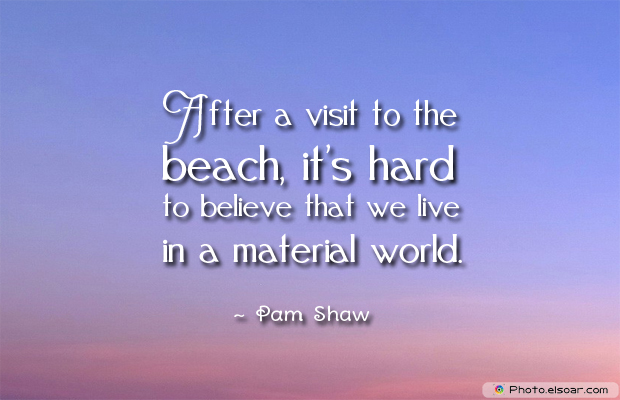 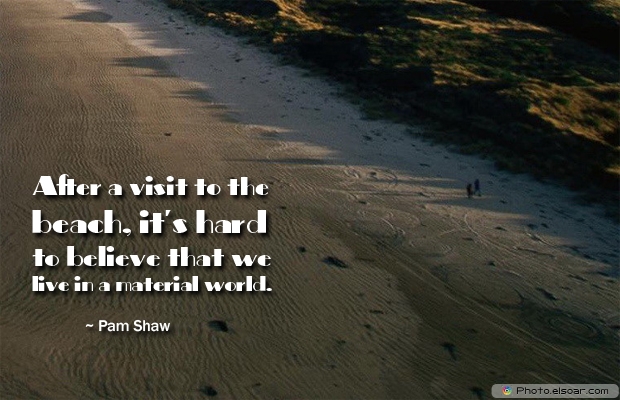 After a visit to the beach, it’s hard to believe that we live in a material world. ~ Pam Shaw 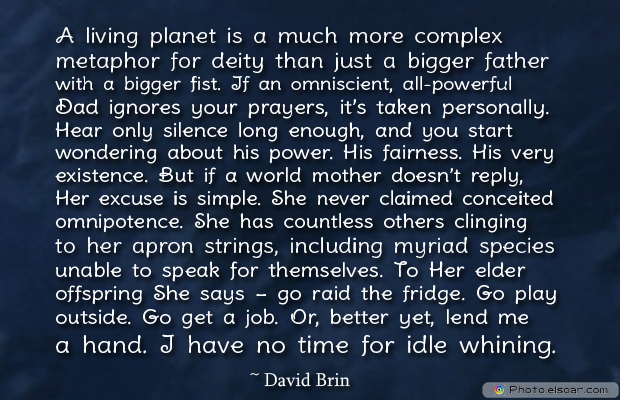 A living planet is a much more complex metaphor for deity than just a bigger father with a bigger fist. If an omniscient, all-powerful Dad ignores your prayers, it’s taken personally. Hear only silence long enough, and you start wondering about his power. His fairness. His very existence. But if a world mother doesn’t reply, Her excuse is simple. She never claimed conceited omnipotence. She has countless others clinging to her apron strings, including myriad species unable to speak for themselves. To Her elder offspring She says – go raid the fridge. Go play outside. Go get a job. Or, better yet, lend me a hand. I have no time for idle whining. ~ David Brin