Our talk about the United States of America, the mother and parents of millions of American citizens. We talk especially about American Flag Day.

With quotations in pictures, inspirational sayings in the best and most popular. 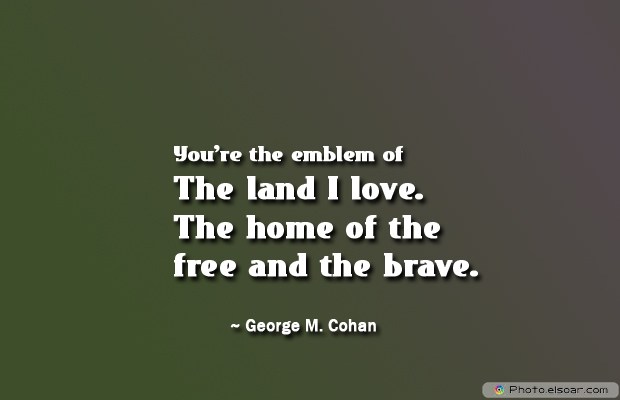 You’re the emblem of
The land I love.
The home of the free and the brave. ~ George M. Cohan 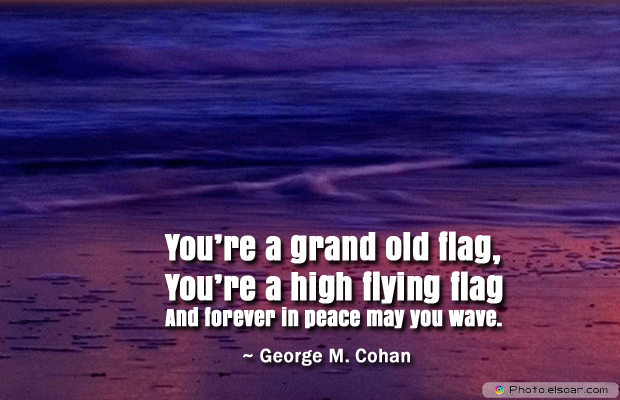 You’re a grand old flag,
You’re a high flying flag
And forever in peace may you wave. ~ George M. Cohan

Your flag and my flag,
And how it flies today
In your land and my land
And half a world away!
Rose-red and blood-red
The stripes forever gleam;
Snow-white and soul-white –
The good forefathers’ dream;
Sky-blue and true-blue, with stars to gleam aright –
The gloried guidon of the day, a shelter through the night. ~ Wilbur D. Nesbit – Your Flag and My Flag 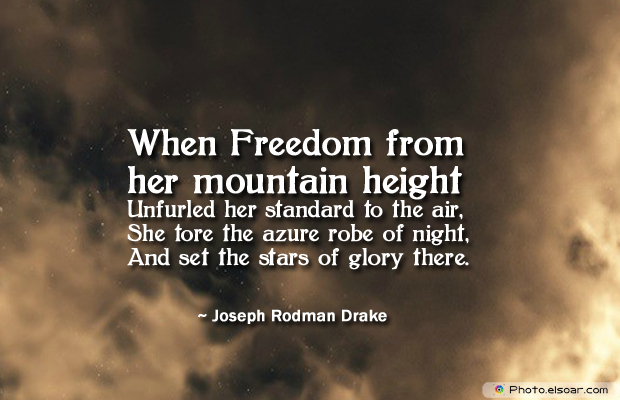 When Freedom from her mountain height
Unfurled her standard to the air,
She tore the azure robe of night,
And set the stars of glory there. ~ Joseph Rodman Drake – The American Flag

We take the stars from heaven, the red from our mother country, separating it by white stripes, thus showing that we have separated from her, and the white stripes shall go down to posterity, representing our liberty. ~ George Washington, attributed 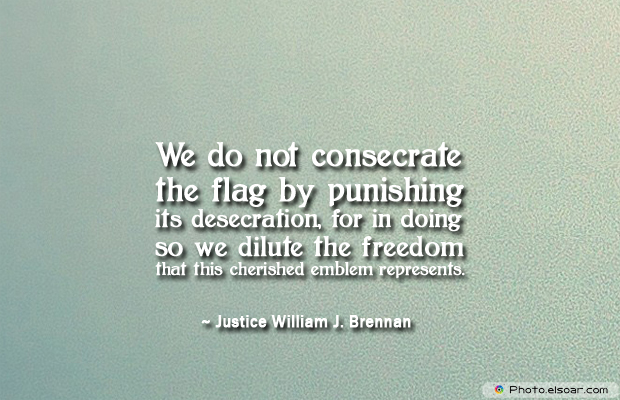 We do not consecrate the flag by punishing its desecration, for in doing so we dilute the freedom that this cherished emblem represents. ~ Justice William J. Brennan – for the Majority US Supreme Court Decision, 3 July 1989 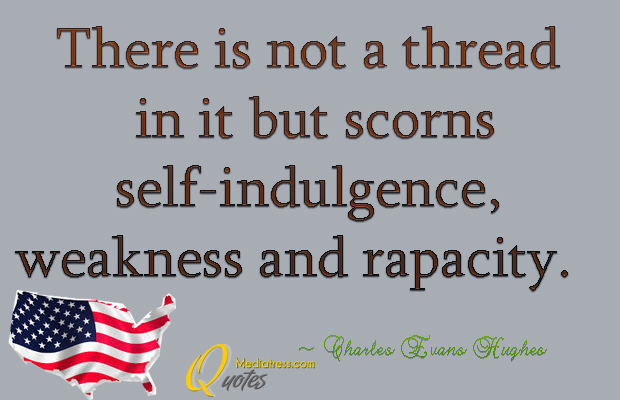 There is not a thread in it but scorns self-indulgence, weakness and rapacity. ~ Charles Evans Hughes 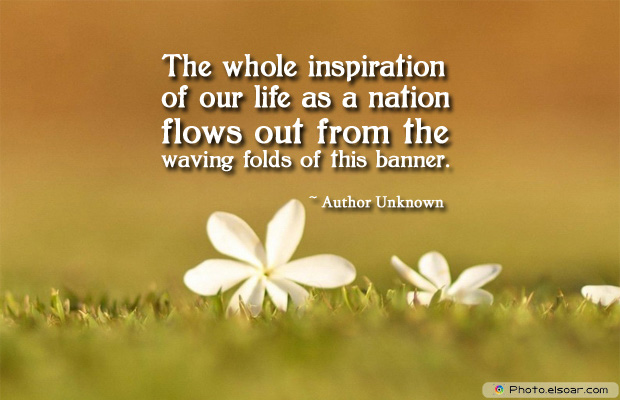 The whole inspiration of our life as a nation flows out from the waving folds of this banner. ~ Author Unknown 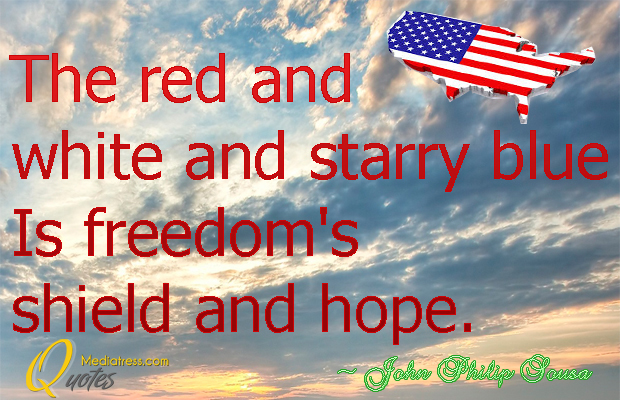 The red and white and starry blue
Is freedom’s shield and hope. ~ John Philip Sousa 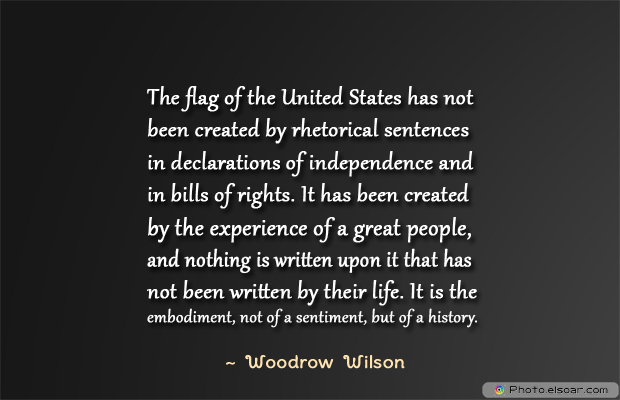 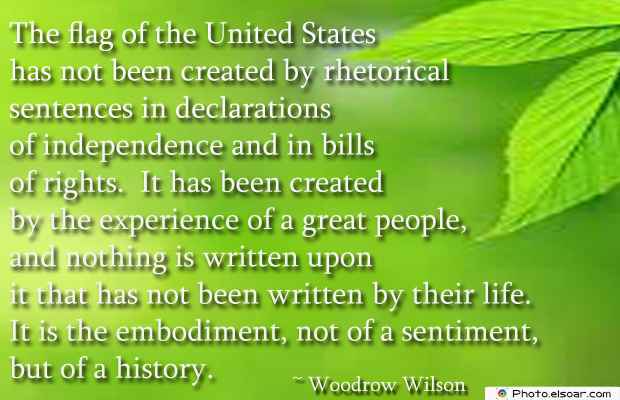 The flag of the United States has not been created by rhetorical sentences in declarations of independence and in bills of rights. It has been created by the experience of a great people, and nothing is written upon it that has not been written by their life. It is the embodiment, not of a sentiment, but of a history. ~ Woodrow Wilson 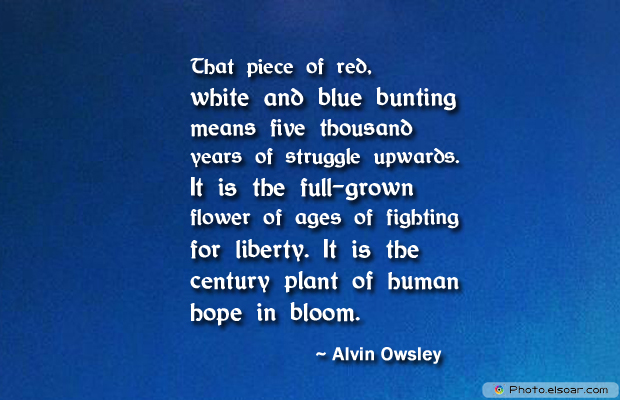 That piece of red, white and blue bunting means five thousand years of struggle upwards. It is the full-grown flower of ages of fighting for liberty. It is the century plant of human hope in bloom. ~ Alvin Owsley 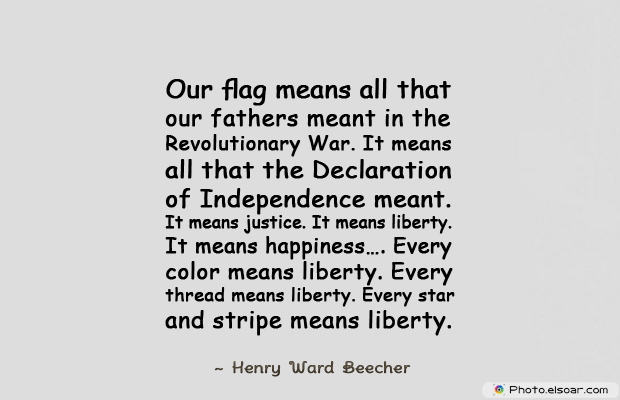 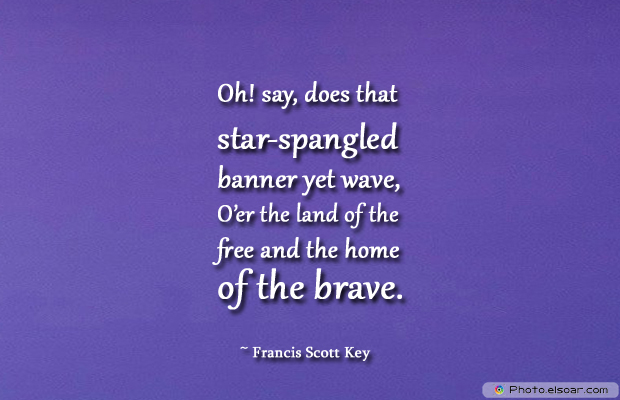 Oh! say, does that star-spangled banner yet wave,
O’er the land of the free and the home of the brave. ~ Francis Scott Key – The Star-Spangled Banner 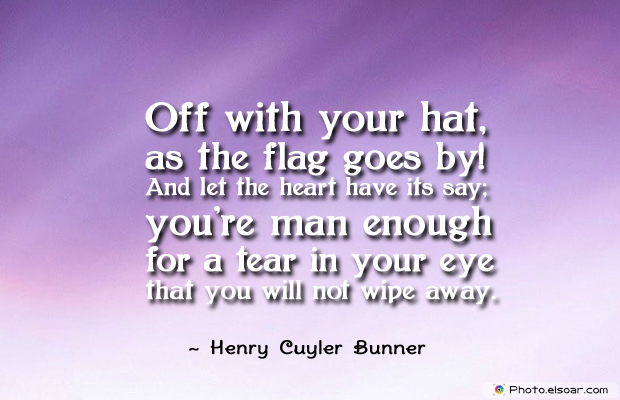 Off with your hat, as the flag goes by!
And let the heart have its say;
you’re man enough for a tear in your eye
that you will not wipe away. ~ Henry Cuyler Bunner 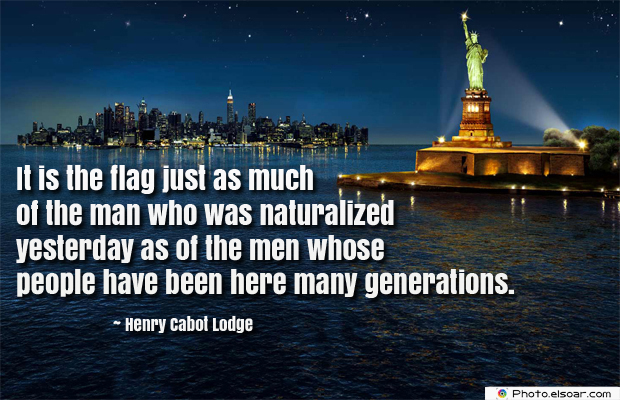 It is the flag just as much of the man who was naturalized yesterday as of the men whose people have been here many generations. ~ Henry Cabot Lodge 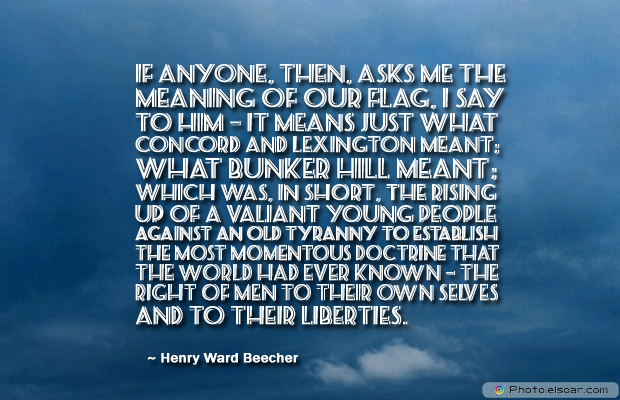 If anyone, then, asks me the meaning of our flag, I say to him – it means just what Concord and Lexington meant; what Bunker Hill meant; which was, in short, the rising up of a valiant young people against an old tyranny to establish the most momentous doctrine that the world had ever known – the right of men to their own selves and to their liberties. ~ Henry Ward Beecher 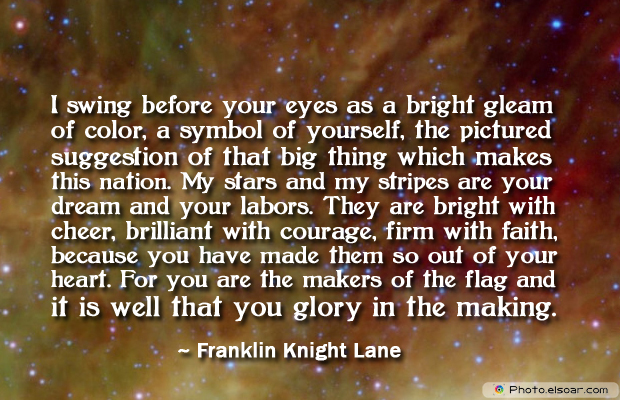 I swing before your eyes as a bright gleam of color, a symbol of yourself, the pictured suggestion of that big thing which makes this nation. My stars and my stripes are your dream and your labors. They are bright with cheer, brilliant with courage, firm with faith, because you have made them so out of your heart. For you are the makers of the flag and it is well that you glory in the making. ~ Franklin Knight Lane 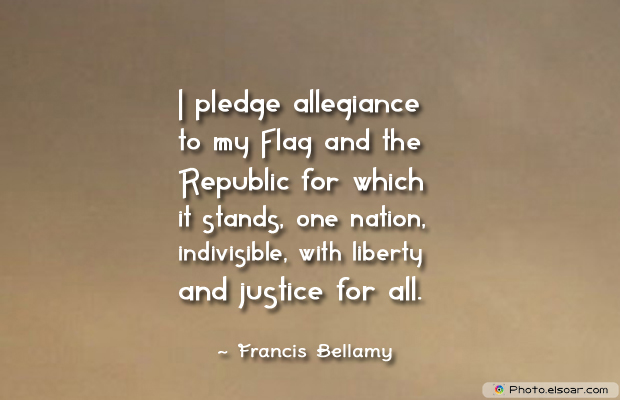 I pledge allegiance to my Flag and the Republic for which it stands, one nation, indivisible, with liberty and justice for all. ~ Francis Bellamy – The Youth’s Companion, 8 September 1892 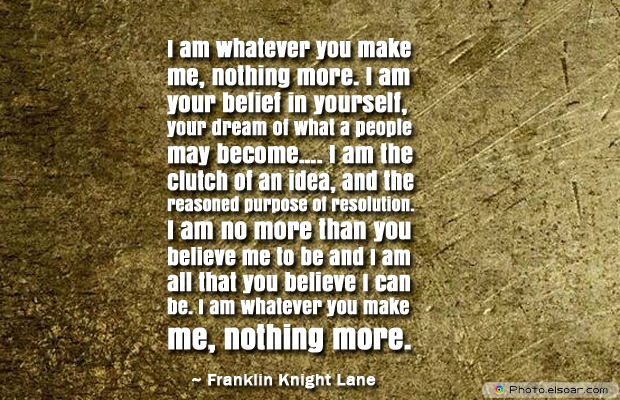 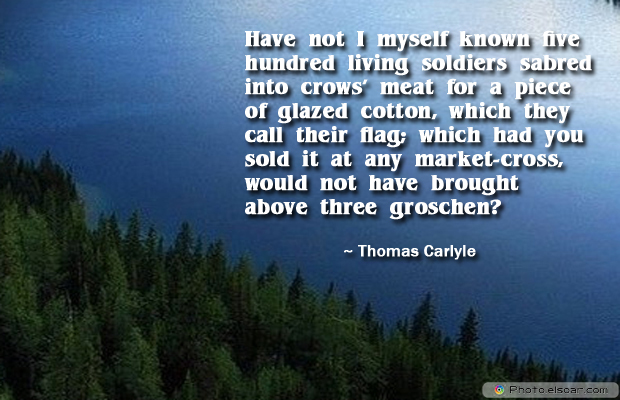 Have not I myself known five hundred living soldiers sabred into crows’ meat for a piece of glazed cotton, which they call their flag; which had you sold it at any market-cross, would not have brought above three groschen? ~ Thomas Carlyle – “Sartor Resartus” 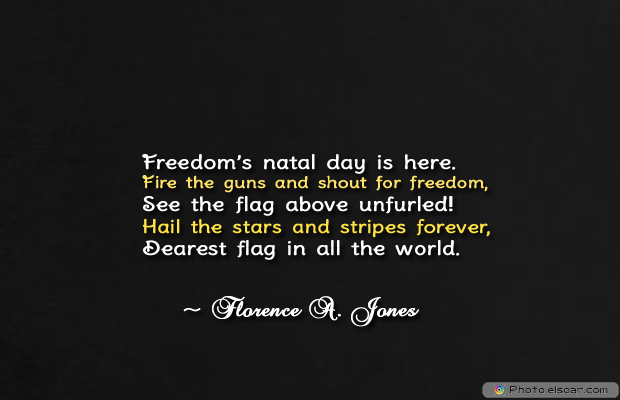 Freedom’s natal day is here.
Fire the guns and shout for freedom,
See the flag above unfurled!
Hail the stars and stripes forever,
Dearest flag in all the world. ~ Florence A. Jones 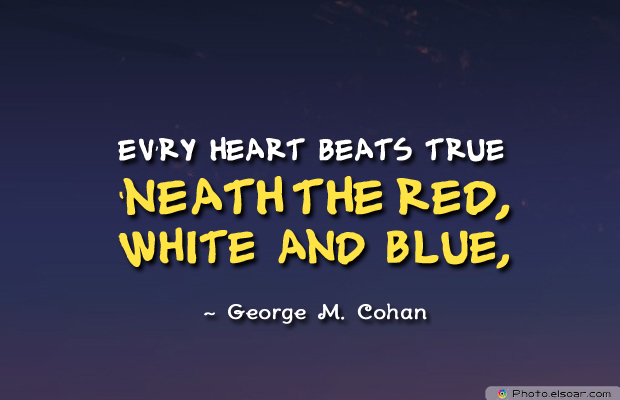 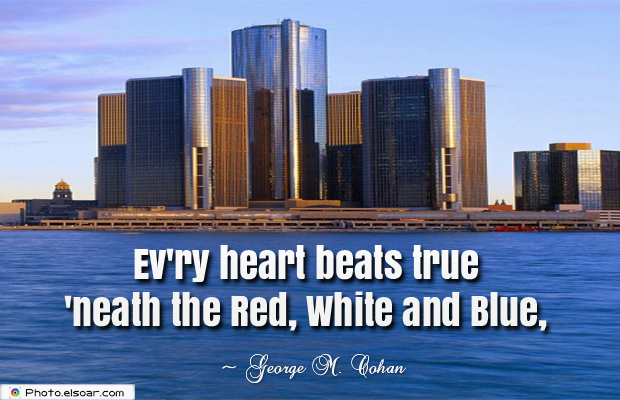 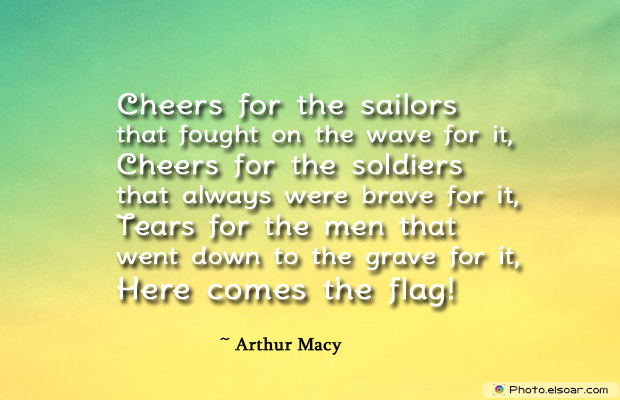 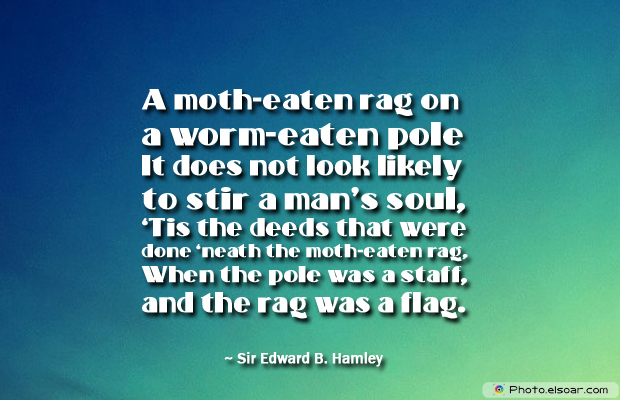 A moth-eaten rag on a worm-eaten pole
It does not look likely to stir a man’s soul,
‘Tis the deeds that were done ‘neath the moth-eaten rag,
When the pole was a staff, and the rag was a flag. ~ Sir Edward B. Hamley – 1824-1893 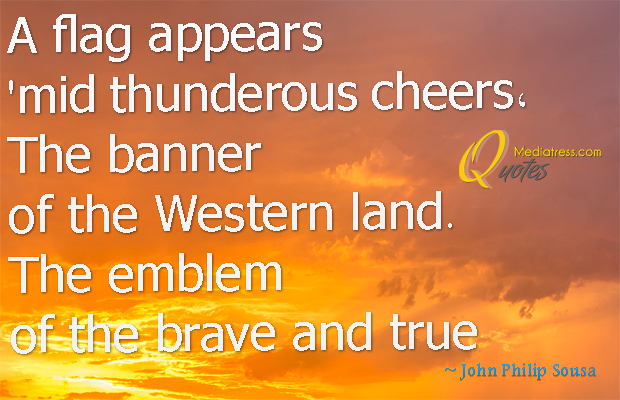 A flag appears ‘mid thunderous cheers,
The banner of the Western land.
The emblem of the brave and true ~ John Philip Sousa