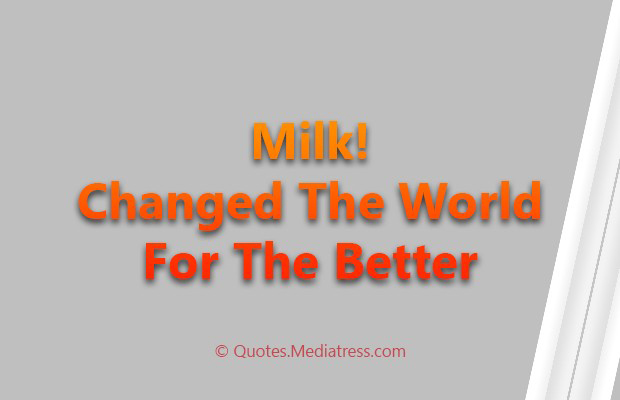 There’s a commonly used negative phrase, that’s popular amongst us. It is “I’m not the only one! Am I going to be the one who ruins the world? Is there no one of concern to you but me?” These are all negative statements, rather than positive statements. The positive individuals don’t know how to think like this. I’m sorry to say, these statements are egocentric. Only self-centered individuals are the ones who think like this (Changed The World For The Better! NOW).

Let me tell you a story, which is a very symbolic one. The story says there was a great starvation in a village. The starvation was so great that everyone was hungry; especially the children were hungry and thirsty. The ruler of the village decided to find a solution to the starvation by getting a gigantic pot, and saying, “Everyone young or old shall put a cup of milk in the pot. A cup of milk will not affect every household, but it will affect the greater community, and that everyone gets to drink milk together.

However, it’s important that everyone comes today and puts the cup of milk because tomorrow morning the whole village comes together and we drink together. Whoever has milk will quench the thirst of whoever who doesn’t have any.”

The people of the village began implementing the request. The ruler didn’t need to put a police on the gigantic pot, because everyone was hungry. There was no reason for anyone to cheat or to go drink out of the pot. Truly, no one violated the pot or took anything out of it. The next day in the morning, the entire village came together, and the ruler came.

They looked at the gigantic pot, and mashAllah it was filled to its rim. However, it was not filled with milk, it was filled with water. Where did the milk go? Everyone in the village said, “It’s okay I’ll just keep the milk to myself, and I’ll give them water. It won’t make a big difference. Will I be the one who ruins it all? Is my cup of water going to affect the amount of milk in the pot? It won’t even show in the middle of all the milk in the pot.”