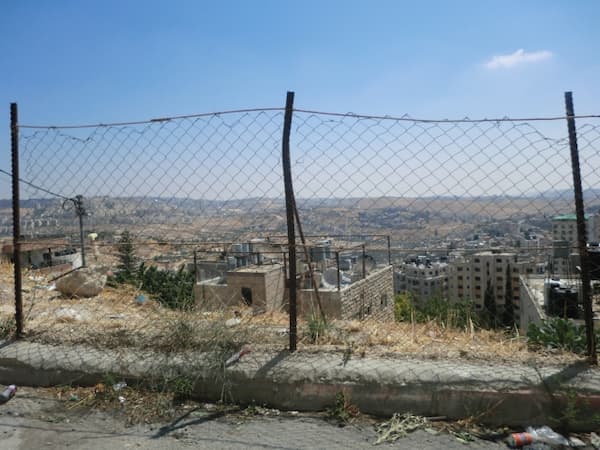 Homeland Lost by reportage photographer Alan Gignoux is a photographic essay that juxtaposes the portraits of individual Palestinian exiles and their families with present-day images of the places they left in 1948.
The above are the first lines on the invitation to the touring exhibition Homeland Lost held at Cairo’s Contemporary Image Collective (CIC). It took two years, said photographer Alan Gignoux, to locate the exact places where the heroes and heroines of his stories lived almost 50 years ago. Apparently, just as the years have left their marks on the faces of people, Israeli bulldozers have left their “touches” on the land.

Asked about his main aim behind the exhibition, Gignoux said that it was to create awareness. And, sure enough, there’s a tinge of bitter awareness that dawns on you as you observe the pictures. One, for example, portrays the city built on the area of the notorious Deir Yassin massacre and a rabbi dressed in black crossing a dead street. One man sits on a sofa with a drawing of a young girl hanging on the wall behind him. He had fled with his family to Lebanon, but his daughter Raafat was killed in a 1986 US assault on Tripoli, and all that remains for him is the portrait. A school basketball court was built on the rubble of their past abode, but what kind of spirit will the game teach there!

The main feature of the exhibition is the combination of person and place. Besides being interesting, it makes a statement about the identity of people and how they relate to their land and past. Some of the portrayed characters lived in bourgeois houses, some in modest houses, and some in tents or in open fields. But they all have one thing in common: They all lost their homes and cannot return. Gignoux thinks that Arabs in particular have this special attachment to their land, but isn’t this so much human nature? You may travel, but there will always be a special place called home.

Yet this attachment to one’s land, in particular, is not the only thing about Arabs that Gignoux has touched on in his journey. He connected with these people through networking and was met with the famous Arab hospitality. When he was first planning the exhibition, however, everybody warned him to expect Palestinians to be reluctant to cooperate, but that wasn’t the case at all. As soon as the idea was explained, they were friendly and helpful, actually happy to be part of his project, Gignoux said.

In the end, Gignoux has managed to establish the perfect inclusive balance in the exhibition. Everyone is represented in the photos. You see old men and young ones, rappers and athletes, a church and a mosque, unveiled women and a young girl with a hijab and black-and-white Palestinian bandana around her head. Even an aristocrat’s portrait is displayed side-by-side with that of a poor man currently inhabiting a tent in a refugee camp. And although the photos are not many, they give the required overview.

The black-and-white photos help evoke an aura of a faraway past. The pictures of aging people, sometimes with their grandsons, tell how much time has passed, how many years these people have walked with the weight of having left their home behind resting heavily on their hearts, and how colorless and joyless their life can be in that sense. One picture shows a man with his son and granddaughter – a young lady already – all looking amazingly alike.

Naturally, since the exhibition is not about Sabra and Shatila, or any of the other massacres, the horror of the stories is not immediate. But when one sees the pictures and the places, reads the captions and attempts to place oneself in the shoes of these persons, the shock can be felt. It is depressing to think of what memories the people photographed must have of the old days and the loss they still suffer. A story that particularly touched me was of an old man who wasn’t permitted entry to Canada to visit his four immigrant sons.

Another sad element is the present state of these places, which is not always a brighter picture. One place in Haifa was turned into an ugly settlement for Eastern European settlers, and looks much like the crowded, unaesthetic housing areas of Poland. Another picture depicts an elegant house that, in the past, stood opposite to the house of former British Allenby Barracks. Now it is part of the German Colony in the Upper Boqa serving as a meeting place of past and present occupiers.

Gignoux’s exhibition does not aim to give a heroic impression of Palestinians; it is completely down-to-earth. It only helps us touch their memories and their lives as human beings just like us. You enjoy the variety, the old buildings, and the landscape, but the burden of awareness is what is left in mind.

Homeland Lost was shown in Lebanon, Israel, and Egypt. It will be on exhibit the Linen Hall Library, Belfast (dates to be confirmed) and the Spitz Gallery in London, where it will be exhibited from May 7th to 20th.