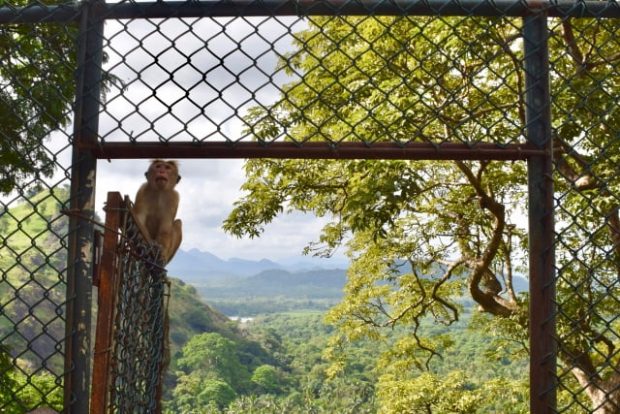 Legend has it that the monkeys were formed from the head lice of the Manjusree Bodhisattva, who in Buddhism represents the embodiment of wisdom and, according to folk tradition, raised the hill upon which Swayambhu stands.

From the tourist centre Thamel, the Monkey Temple Kathmandu is a 45 minute walk, just over 2 miles, finishing 100m higher than where you started. The main entrance has 365 steps leading up to the main Stupa complex representing the 365 days in a year. The walk there is in part guided by Swayambhunath’s golden spire and large white dome which can be seen from miles away.

For foreigners the current entrance fee is Rs 200, the ticket booth is at the top of the steps with another ticket office by the main parking area.

The Way To Enlightenment

Swayambhu, like every Stupa in Nepal, has giant pairs of eyes staring out from the four sides of the main tower. These are the Buddha eyes, also known as wisdom eyes, overlooking the valley in four directions.

The white dome underneath represents the world and the golden spire with thirteen tiers symbolises the way to enlightenment humans have to go once they have freed themselves from the world.

Legend Of The Holy Man

According to legend a holy man has been meditating in the vaults of a small, plain temple called Shantipur, near the main Stupa, for 1500 years and remains there to help the people of Kathmandu valley when needed.

Many of Swayambhu’s structures suffered in the earthquake of April 2015, however, the white Buddhist Stupa survived although many of the buildings, monasteries and temples around the main stupa were damaged or collapsed.

UNESCO and the Ministry of Culture are undertaking repairs and restoration, even though it was damaged it’s still a photogenic place that locals and visitors throng too.