Quotes are an essential part of popular wisdom. They are loaded with teachings and morals to explain some aspects of life and relationships between people. Also, some are even funny.

It is curious the way in which expressions, Quotes and sayings that refer to all kinds of animals have been collected in the popular English language.

We have a collection of beautiful quotes and sayings about animals; I think this is very loving and emotional.

What we have will be divided into three sections.

With every quote or saying, image/design, I hope you like it.

“You enter into a certain amount of madness when you marry a person with pets.” — Nora Ephron 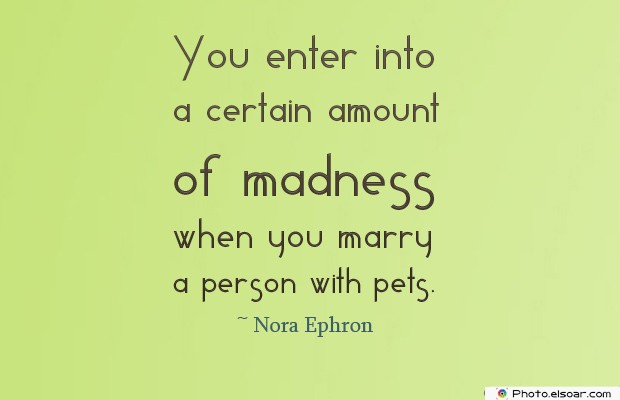 “Until one has loved an animal, a part of one’s soul remains unawakened.” — Anatole France 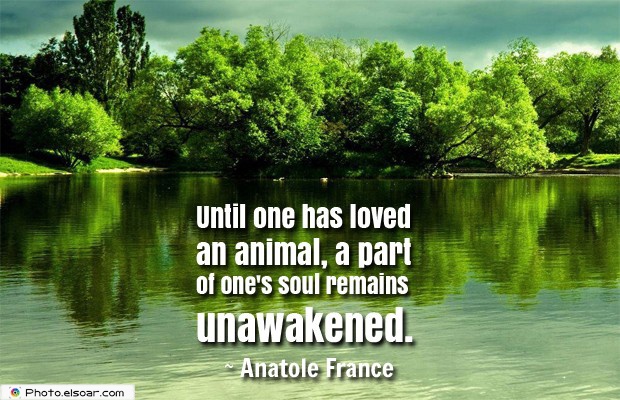 “There is in all animals a sense of duty that man condescends to call instinct.” — Robert Brault

“To insult someone we call him “bestial.” For deliberate cruelty and nature, “human” might be the greater insult.” — Isaac Asimo 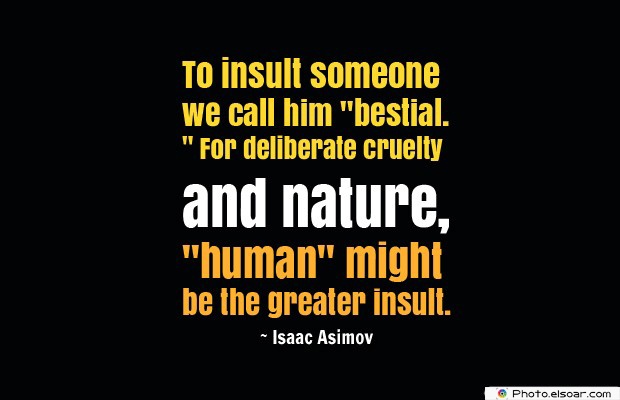 “There is a drop of blood in the snow before me…. The coyote… is in estrus…. spurred to let out a bit of herself, sending a message, telling everyone she was now ready, that the clock of her winter was ticking toward spring.” — Craig Childs ~ The Animal Dialogues: Uncommon Encounters in the Wild 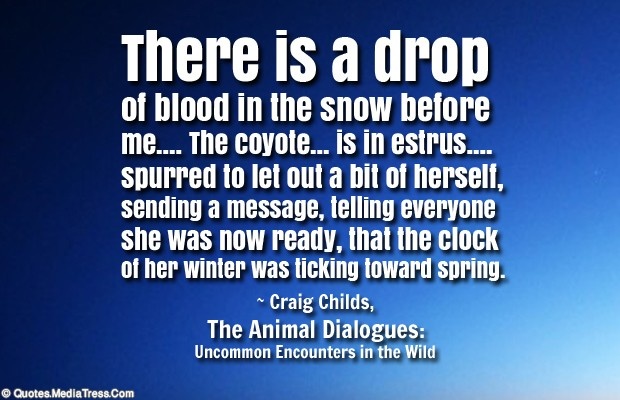 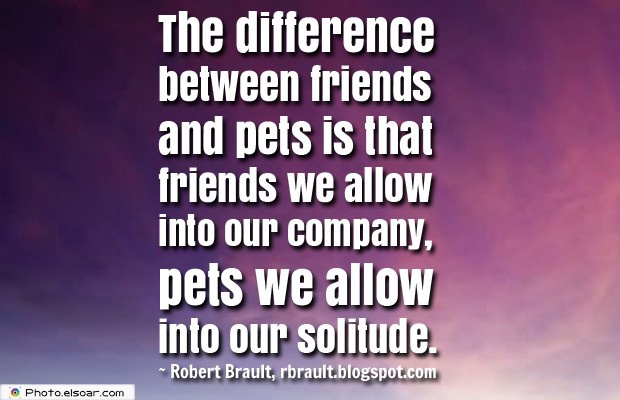 “Our perfect companions never have fewer than four feet.” — Colette 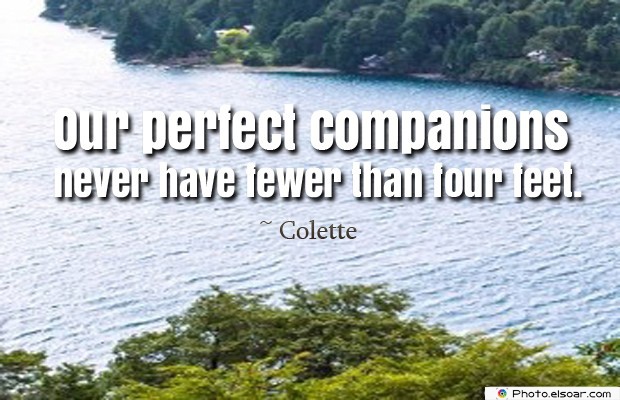 “Most pets display so many humanlike traits and emotions it’s easy to forget they’re not gifted with the English language and then get snubbed when we talk to them and they don’t say anything back.” — Stephenie Geist 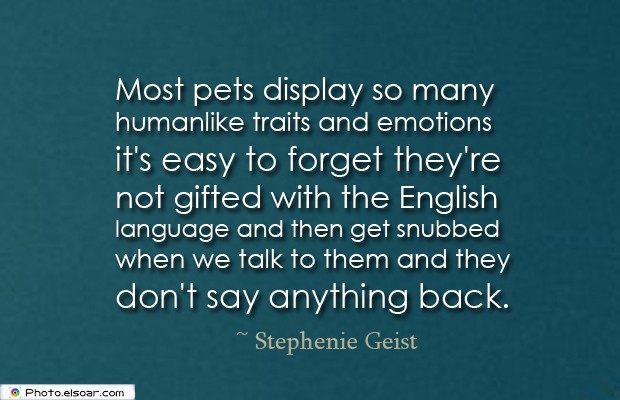 “Man is rated the highest animal, at least among all animals who returned the questionnaire.” — Robert Brault 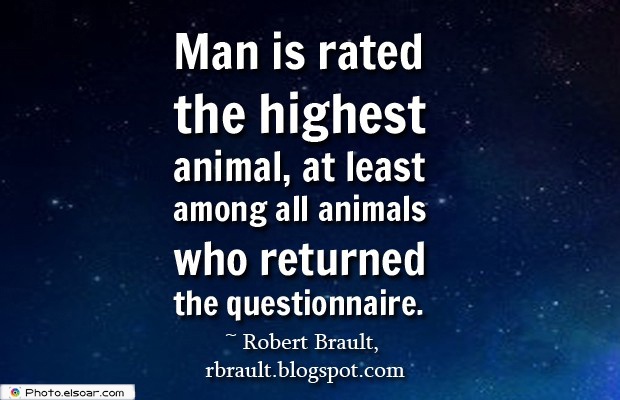 “Lots of people talk to animals…. Not very many listen, though…. That’s the problem.” — Benjamin Hoff ~ The Tao of Pooh 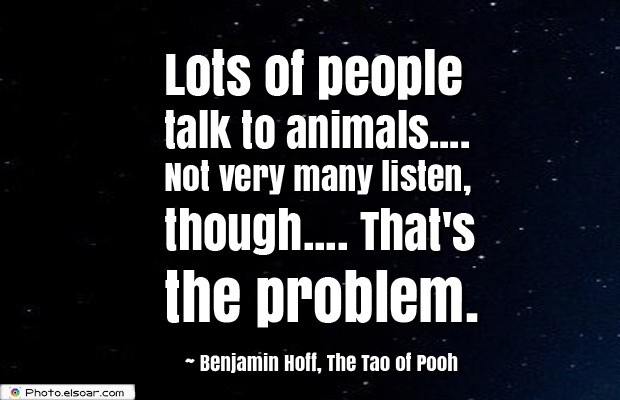 “It often happens that a man is more humanely related to a cat or dog than to any human being.” — Henry David Thoreau 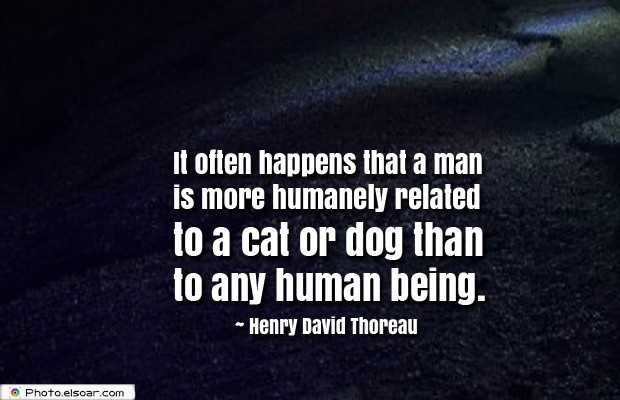 “It is an important and popular fact that things are not always what they seem. For instance, on the planet Earth, man had always assumed that he was more intelligent than dolphins because he had achieved so much — the wheel, New York, wars and so on — whilst all the dolphins had ever done was muck about in the water having a good time. But conversely, the dolphins had always believed that they were far more intelligent than man — for precisely the same reasons.” — Douglas Adams ~ The Hitch-Hiker’s Guide to the Galaxy 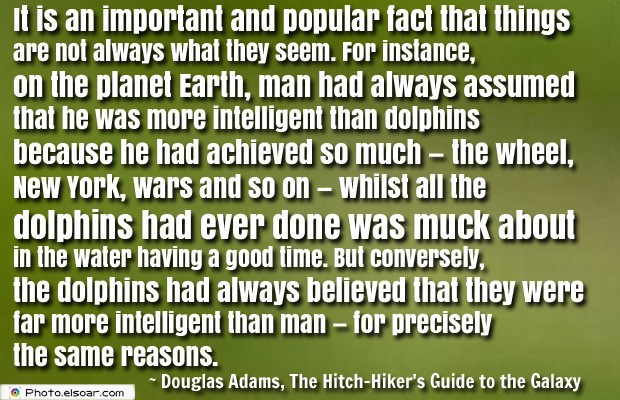 “It is a perversely human perception that animals in their native habitat are running wild.” — Robert Brault 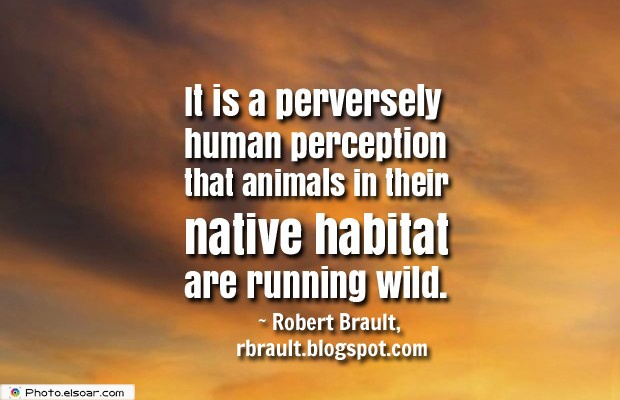 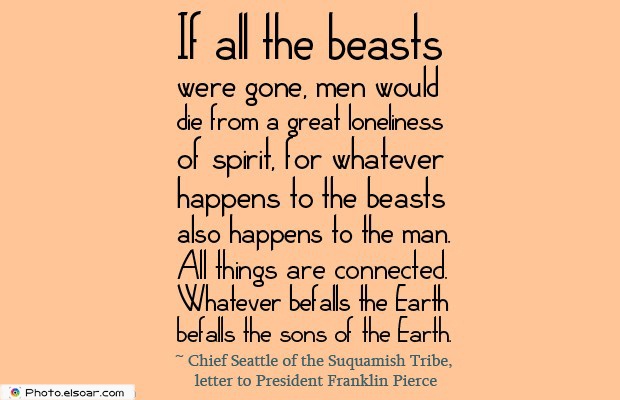 “I subscribe to the theory that Mankind never domesticated any animal. They came in from the cold and looked cute until they were fed.” — David Beard, @Raqhun 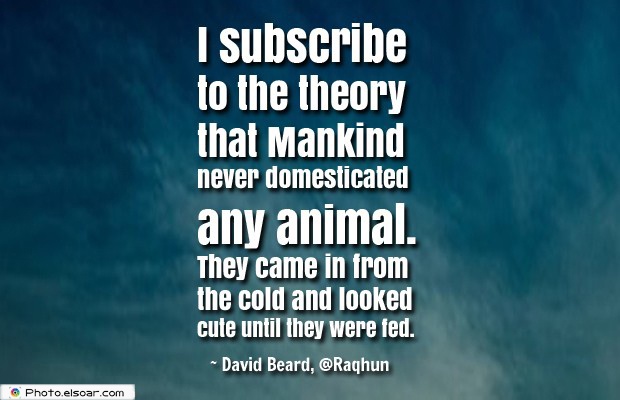 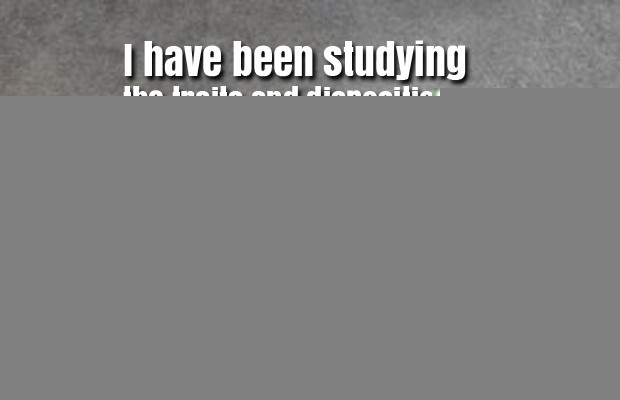 “I believe in animal rights, and high among them is the right to the gentle stroke of a human hand.” — Robert Brault 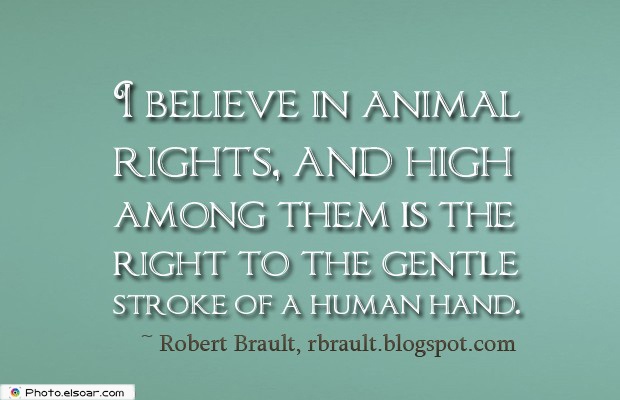 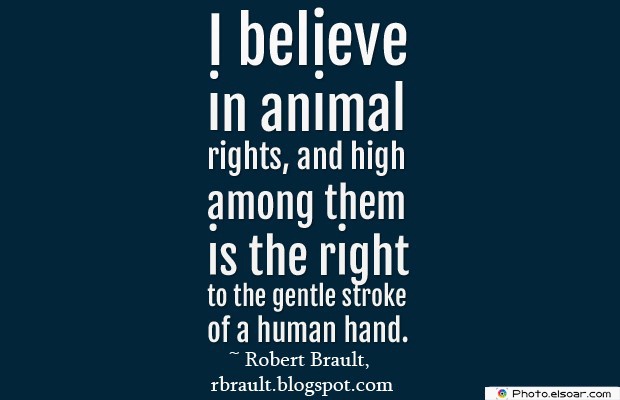 “Ever consider what pets must think of us? I mean, here we come back from a grocery store with the most amazing haul — chicken, pork, half a cow. They must think we’re the greatest hunters on earth! — Anne Tyler ~ The Accidental Tourist 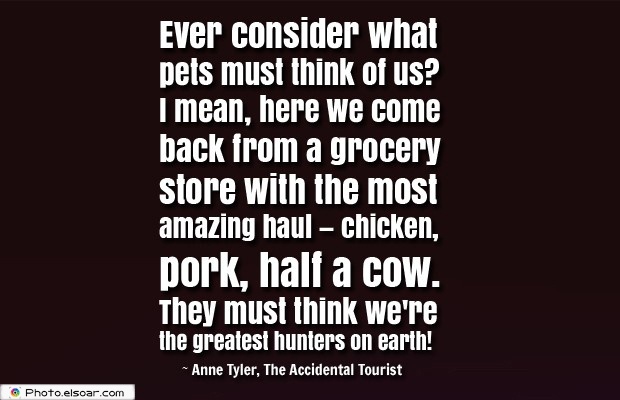 “Be it human or animal, touch is a life-giving thing. Has anyone ever had a stroke or a heart attack while cozied up with a pet? I doubt it.” — Robert Brault 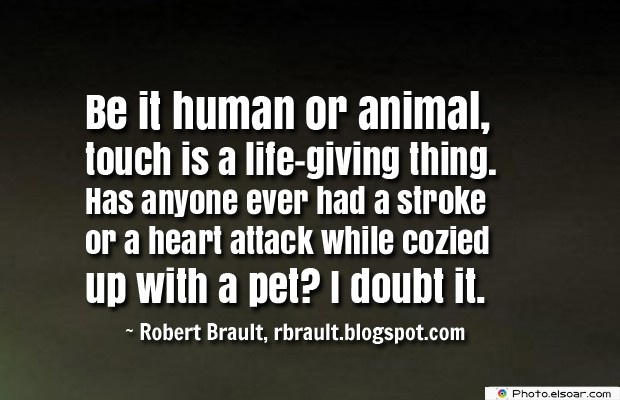 “Animals have these advantages over man: they never hear the clock strike, they die without any idea of death, they have no theologians to instruct them, their last moments are not disturbed by unwelcome and unpleasant ceremonies, their funerals cost them nothing, and no one starts lawsuits over their wills.” — Voltaire ~ letter to Count Schomberg, 1769 August 31st 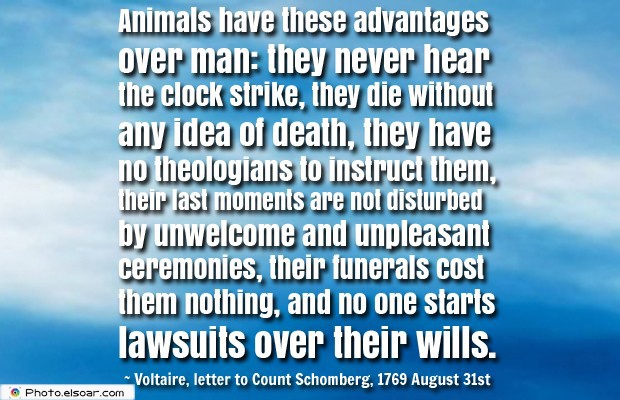 “Animals are such agreeable friends — they ask no questions, they pass no criticisms.” — George Eliot 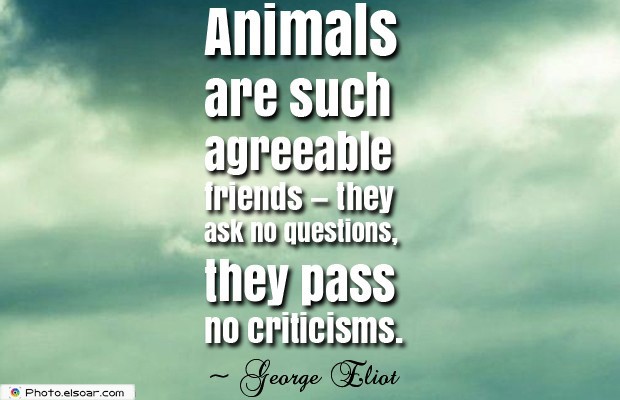 “An animal’s eyes have the power to speak a great language.” — Martin Buber 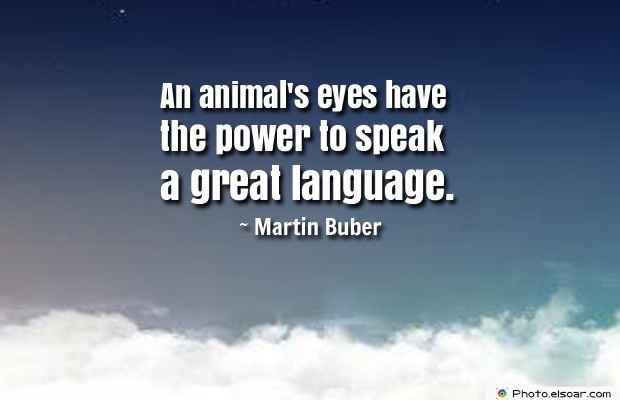 “[H]e doesn’t reckon his dog has human feelings, but he sure lets you know when you hurt his instincts.” — Robert Brault 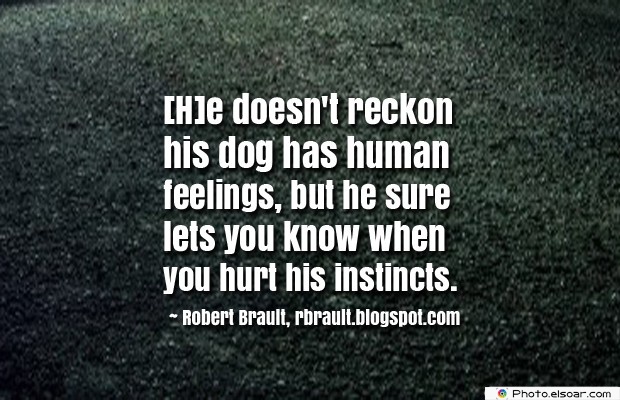