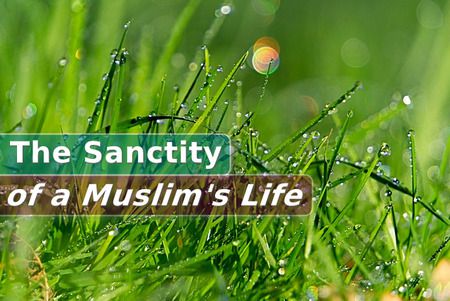 Allah Almighty says: Prophet Muhammad! Say that “Surely my Lord has guided me to the Straight Path, the upright religion, the faith of Abraham, a man of pure faith who was never a polytheist“.

The Sanctity of the Believer’s life

Prophet Muhammad (peace be upon him) said: If the people of the heavens and the people of the earth all combined got involved in shedding the blood of a believer, then Allah would cast them all-in the Hellfire.

Human life is sacred in Islam. Moreover, the sanctity of a Muslim’s life is high by regarded in slam, even f that Muslim is a sinner.

Differences of practice within Islamic faith is by no means a valid reason to butcher others.

In Islam, one Muslim life equals all lives combined, to the extent that if one nation kills a believer, then this entire nation deserves Allah’s punishment in return.

You Can Read: Today’s lesson: Do Not Sell Items You Do Not Possess

Only a true believer with sound consciousness understands the value of life and the sanctity of their fellow believers, while only those with corrupt consciousness take such matters lightly as they remain oblivious to Allah’s punishment for murder.

Such are the teachings of Islam that we should live by and show to the world Such is the Upright Religion.