Designed with polished slabs of blue-gray marble, the outer walls of the Holy Mosque are fascinating, without exaggeration. Equally captivating is the well-polished 560×350 ft. white marble floor.

Aided by the air-conditioning system, as well as the underground network of cool water pipes, these marbles help keep the floor cool through the reflection of sunlight. Quite unlike its surrounding environment, the Ka`bah itself is made of rough granite. Possessing just a single door, the nearly 50 ft. high structure is decorated with gold and silver lamps hanging from the ceiling.

Lying at the western corner of the Ka`bah is the Black Stone. Originally a single stone, it is now fragmented into a number of smaller pieces that are cemented and delicately held together in a silver band.

Determined to give the Prophet’s Mosque a befitting look, the government of the Kingdom of Saudi Arabia assembled various exotic building materials were for the latest renovation of the mosque. The kingdom’s rich granite reserve was well employed: The exterior walls of the mosque are lavishly decorated with pale, pink granite obtained from Al-Qasim Province.

The steps and entrances of the mosque are beautifully clad in gray granite, whereas the external skirting is sheathed with dark-pink granite.

Far from containing only local materials, this gigantic structure also boasts the white Italian marble covering the 2,017 columns inside. This is in addition to the massive screwless and glue-free doors dotting the various entrances.

Constructed in Spain using techniques that are hundreds of years old, these doors are embellished with ornamental brass cast in France and were subsequently plated with gold in the UK for good measure.

Al-Aqsa Mosque has gone through a series of renovations and expansions over the years. Its original wooden dome was replaced with a concrete one, with an outer covering made of lead. The mosque’s interior is supported by columns made of white Italian marble and stone. 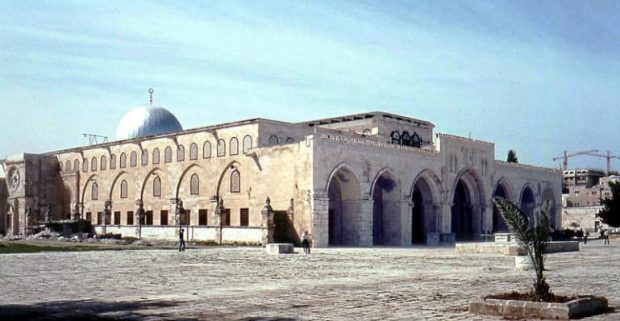 Some parts of the walls are also decorated with marble and mosaics, while the interior arches are designed with green-tinted gypsum and gold.

Built in Jordan over a period of four years, the mosque’s pulpit was designed using computer images and was subsequently constructed in line with an ancient woodwork technology that uses pegs instead of nails.

Efforts are ongoing to enhance the mosque’s structure and beauty because it is not as magnificent as the other two holier mosques in Makkah and Madinah. When completed, the minaret planned by King Abdullah of Jordan is expected to become the tallest structure in the entire old city of Jerusalem.