In the aftermath of the Romantic Revolution of France, a new art movement emerged called The School of 1830 or The School of Barbizon, which urged artists to emigrate out of cities to the pristine environment of nature and make it a central source of artistic inspiration.

Followers of this school sought refuge in the Fontainebleau forest and settled in a small village called “Barbizon”. This is how the movement got its’ name. Artists who followed the movement, were influenced in the beginning by the Romantic school. Art historians considered them a chain linking the Romantic school to Realism. Its followers wanted attachment to Mother Earth, to nature, and to the environment to be a central theme in their works. The mixture of nature with their inner sensations, and feelings added a new dimension to the beauty of the universe.

Prominent Figures of the School

The French artist Theodore Rousseau is one of the most well-know artists who represented the Barbizon’ s school of art. He preferred such expressions of size, and features of the universe as wild trees, the blueness of skies, and the sunshine. Jean François Millet is also another follower of this school, although he differs from his colleagues to some extent. Millet was originally a farmer, a peasant before he moved to Paris to study arts. His main topic in Paris was to draw bigger works of art, and to document the lives of workers.

Then when he came to Barbizon, he sought to express his love and attachment to nature. To him nature was the field, the farmer, and the peasant himself who struggles all of his years on the farm. The farmer became the symbol of the land, and the symbol of humanity concurrently.

Antoine Caron, belonged to this school of art. He was considered the most important painter of his era who made nature the center of his works. Caron loved nature and expressed his deep affinity in very soft, gentle, and romantic ways. He presented nature as never before. His works reflected not only what nature had to offer of itself, but also added his own deep inner sensations and feelings. 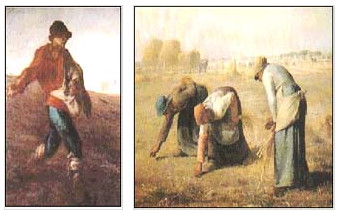 If we look at the two paintings of Jean François Millet, we will notice the following characteristics: 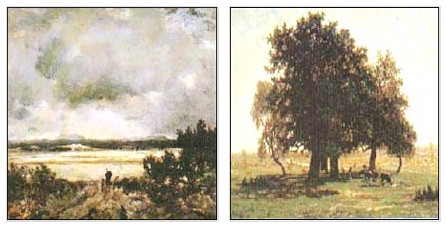 The above two paintings belong to Theodore Rousseau, the first one is a group of trees, and the other is a portrayal of the sunset. Let us learn the distinctive characteristics of both paintings:

Also, Read here: Patch Adams: Breaking Down the Wall Between the Patient and the Physician