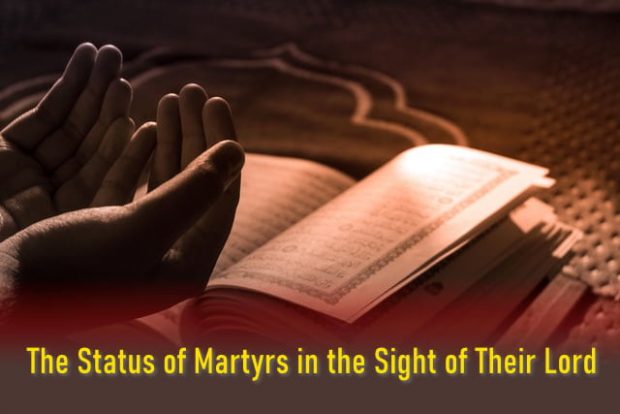 All praise is due to Allah, the Lord of all worlds, Who says in His Ever Glorious Book, “Do not think of those who have been killed in Allah’s way as dead. They are alive with their Lord, well provided for. Happy with what Allah has given them of His favour; rejoicing that for those they have left behind who have yet to join them there is no fear, nor will they grieve. [rejoicing] in Allah’s blessing and favour, and that Allah will not let the reward of the believers be lost.”

I bear witness that there is no god but Allah, and that Muhammad is His Servant and Messenger. May Allah’s Peace and Blessings be upon him, his Household, Companions and upon those who follow their path to the Day of Judgment. Martyrdom for the sake of the Almighty Allah is one of the highest ranks and one of the greatest devotional acts.

It is Allah Who chose those heroes who sacrifice themselves in order to support and defend the truth, protect their homeland and safe its people and territories. Allah said in the Qur’an, “So that Allah may make evident those who believe and [may] take to Himself from among you martyrs .”

Therefore, Allah, the Almighty, has specified high ranks and great virtues and blessings for martyrs.

The merits of martyrs include: They are alive with by their Lord; it is a life beyond the perception of human beings. The Almighty Allah says, “Do not say that those who are killed in Allah’s cause are dead; they are alive, though you do not realize it.”

It is reported that Jabir Ibn Abd Allah said: The Messenger of Allah (PBUH) met me and told me: ‘O Jabir! Why do I see you upset?’ I said: ‘O Messenger of Allah! My father was martyred (in the battle of Uhud) leaving my family and debt behind.’” “He (PBUH) said: ‘Shall I give you news of what your father met Allah with?’” He said: “Of course O Messenger of Allah!” He said: ‘Allah does not speak to anyone except from behind a veil, but He brought your father to speak to Him directly. He said: “[O My slave!] Do you wish that I give you anything?” He said: ‘O Lord! Give me life so that I may fight for You a second time.’

So the Lord, the Most High said: ‘It has been decreed by Me that they shall not return .’ Jabir said: “So this Ayah was revealed “Do not think of those who have been killed in Allah’s way as dead. They are alive with their Lord, well provided for.”

Moreover, just as martyrs are alive with their Lord, they are alive in the memory of their homeland, and their heroic stories will not be forgotten no matter how long time that passes. Another merit for the martyrs is: that their souls enjoy blessings with their Lord and these souls go around in the paradise as they wish.

The Prophet (PBUH) said, “When your brethrs were killed at the battle of Uhud, Allah put their spirits in the crops of green birds which go down to the rivers of Paradise, eat its fruit and nestle in lamps of gold in the shade of the Throne.”

Another merit for the martyrs is that: they will be the people of great reward and complete light on the Day of Judgement as the Almighty Allah says, “The martyrs, with their Lord, will have their reward and their light.”

The Prophet told Umm Harithah Ibn Suraqah when she asked about the destiny of her son Harithah who was martyred in the battle of Uhud, “O mother of Harithah, in the gardens of Paradise there are many ranks, and your son has attained Al-Firdaus, the highest.”

Another merit for the martyrs is that: they will intercede for their families on the Day of Resurrection; a reward from Allah to those families for their good upbringing and education. The Prophet (PBUH) said, “A martyr will be permitted to intercede for seventy of his relatives.”

Another merit for the martyrs is that: the recording of the reward of their good deeds will not cease; rather, their rewards will be given complete and will be multiplied. The Prophet (PBUH) said, “The actions of every dead person come to a halt with his death except the one who is on the frontier in Allah’s path (i.e., observing Ribat).  This latter’s deeds will be made to go on increasing for him till the Day of Resurrection, and he will be secure from the trials in the grave.”

All praise is due to Allah, Lord of the Worlds; may Allah’s Peace and Blessings be upon Prophet Muhammad (PBUH), his companions and followers:

It goes without saying that the status of martyrs is given only to by the true martyr, who knows the truth, protects it, and sacrifices himself sincerely for its sake. The true martyr is the one who dies while defending his land, honor, homeland, and its security and safety.

However, we affirm that being loyal to the lives of our martyrs obliges us to be soldiers for this great homeland, everyone in his respective field, and that each of us exerts his utmost power to serve it.

We all should stand as one man behind our army, police and other national institutions, asking Allah to grant us the reward of martyrdom as the Prophet (PBUH) said, “He who supplicates Allah sincerely for martyrdom, Allah will elevate him to the station of the martyrs, even if he dies on his bed.” May Allah save our country Egypt and all countries of the worlds!

Friday Sermon by Ministry of Awqaf – Arab Republic of Egypt.