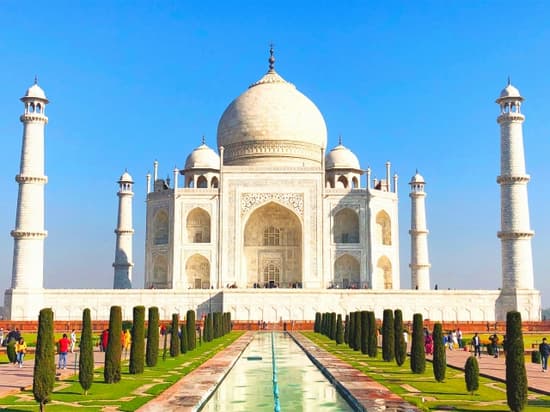 India is a country rich in history and heritage. The abundance of forts, temples and monuments present here stands true to it. For this reason, the country is home to a number of historical sites that attract throngs of tourists from all parts of the world.

If you are a keen enthusiast who loves to explore historical sites, look no further; a visit to India will deeply impress you. Here, we will discuss the top historical travel destinations in India.

The Taj Mahal was built in the 16th century by a Mughal Emperor named Shah Jahan as a symbol of love for his deceased wife, Mumtaj Mahal.

It is a stunning work of art built completely of white marble. The gardens and a huge pool of water that lie in its front magnify its brilliance

It was designed by Shiraz, an Iranian architect, and required 16,000 labors working tirelessly for 20 years to finish building it. It was named many a time as one of the Seven Wonders of the World. To enjoy better the spectacle of its magnificence, visit it on a full-moon day, when it shines gloriously with its white marble reflecting all the moonlight that falls on it.

These caves have some of the best sculptures, carvings and wall murals from India on their walls created by the Buddhist monks over 2,000 years ago. Most of these works were created during the Gupta period where Buddhism reached a peak in India.

These caves have some of the earliest art forms describing the life of Buddha. Ellora is totally made of 17 Hindu, 12 Buddhist and 5 Jain caves. Also, at the Ellora caves the architecture at the Kailashnath Temple is breathtaking.

All these works created by the ancient with simple tools like chisels and hammers. They make you wonder at the artistic prowess of the ancient Indians.

The Sun Temple in Konark is built in the 13th century by the king Narasimhadeva. It is one of the very few temples of Sun God in the whole world.

Built on the shores of Bay of Bengal in Odisha state, most of its greatness lies in the iconic sculpture of the Sun God standing on his chariot with twelve wheels symbolizing 12 months and 7 horses pulling it, which stand for 7 days in a week. The spokes of the wheels create the shadows that give the exact time of the day. Apart from this, there are countless sculptures in the temple that depict the ancient culture and society.

Khajuraho is an ancient temple town in Madhya Pradesh filled with sculptures that depict eroticism. They depict the celebration of the carnal pleasure bestowed to humans, and more intriguing to the modern mind is the way all these sculptures are related to Jainism (there are also some temples belonging to Hinduism) which preaches simplicity.

This place is originally said to have 85 temples, but only 22 of them remain today. They were built from 9th century to 12th century, by the Chandelas, who believed that man has to immerse himself in the carnal desires to the point that he feels to overthrow them and achieve spiritualism.

We hope this information helps you to choose good historical sites in India.

Also, You can see: Trekking Through the Mountains: Be Prepared for a Long Walk