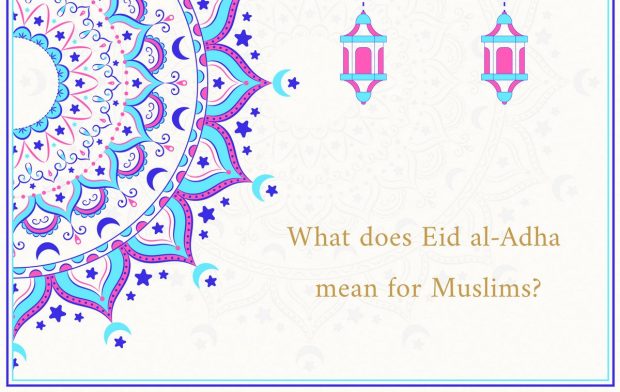 As Allah ordered him to sacrifice his own son Ismael to show his obedience. And to show if he will do that or listen to the devil that told him to refuse and disobey Allah.

Ibrahim was a strong faithful so he decided to obey Allah and took his son to Mount Moriah and he was already about to kill his own son but Allah stopped him and gave Ibrahim a lamb instead of his son to sacrifice.

The famous phrase among Muslims to congratulate on this occasion is Eid Mubarak.

In Eid al-Adha every year, people buy an animal usually goat or sheep this is known as “Udhiya” and they sacrifice the animal to remind themselves of what Ibrahim had done to show his obedience by slaughter the animal then they give the meat to their family and the poor people.

Muslims also go to the mosque to pray Eid al-Adha pray in the morning after the rise of the sun.  They wear new clothes and thank Allah for the blessing he gave them.

They also visit their relatives and friends. Muslims also donate money to charity which is known as “zakat Eid al-Adha” this is one of the most important things they do in that day.

Muslims also do one of the important things to celebrate which is known as one of the five pillars of Islam. This is “Haji pilgrimage”.

In the period of Eid al-Adha, a lot of Muslims travel to Mecca and surroundings areas in Saudi Arabia to do Haji pilgrimage. But it’s for the willing people only as many people can’t afford travel to Mecca. So travel agency from all over the world organize package holiday for Muslims in this period. A lot of people began to save money for a lot of time to can afford travelling to Mecca and do Haji pilgrimage.

The date of the day depend on observing the moon and the length of a particular month may vary between years. so Eid El-Adha is predicted at the start of the month of Dhul Hijja. This day is around ten days before the start of the festival.

Get More wishes in Arabic.