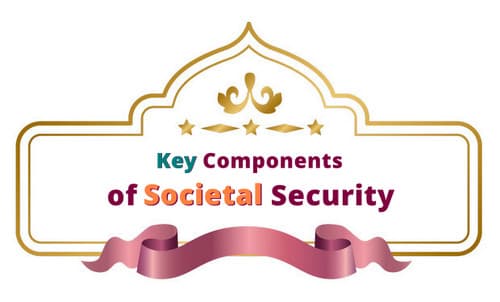 All praise is due to Allah, the Lord of all worlds, Who says in His Ever Glorious Book, “It is those who have faith, and do not mix their faith with idolatry, who will be secure, and it is they who are rightly guided.”

I bear witness that there is no god but Allah, and that Muhammad is His Servant and Messenger. May Allah’s Peace and Blessings be upon him, his Household, Companions and upon those who follow their path to the Day of Judgment.

Security is one of the greatest blessings that the Almighty Allah has blessed His servants with, as Allah, the Most High, says, “[He did this] to make the Quraysh feel secure. Secure in their winter and summer journey.

So let them worship the Lord of this House; Who provides them with food to ward off hunger, safety to ward off fear.”

Allah, the Almighty, also said, “Have We not established for them a secure sanctuary where every kind of produce is brought, as a provision from Us? But most of them do not comprehend.” He, (Glory be to Him) also said, “Can they not see that We have made [them] a secure sanctuary though all around them people are snatched away? Then how can they believe in what is false and deny God’s blessing.”

The Prophet (PBUH) said, “Whoever among you wakes up in the morning secured in his dwelling, healthy in his body, having his food for the day, then it is as if he possessed the whole world.'”

Undoubtedly, security is a community work shared by all the people of the country, as no one of them can bring about security for himself and his family independently of the security of society. People in their communities and countries are like passengers of a ship that cannot survive with some of them away from the others. Representing this meaning the Prophet (PBUH) said, “The likeness of the man who observes the limits prescribed by Allah and that of the man who transgresses them is like the people who get on board a ship after casting lots. Some of them are in its lower deck and some of them in its upper (deck). Those who are in its lower (deck), when they require water, go to the occupants of the upper deck, and say to them: “If we make a hole in the bottom of the ship, we shall not harm you.” If they (the occupants of the upper deck) leave them to carry out their design they all will be drowned. But if they do not let them go ahead (with their plan), all of them will remain safe.”

This societal security has pillars and key components, including: Strengthening faith that brings reassurance to society and protects it against extremism and intellectual deviations, as the Almighty Allah says, “Those who have faith and whose hearts find peace in the remembrance of Allah- truly it is in the remembrance of Allah that hearts find peace.” It is faith in Allah which achieves the inner security of the members of society, which is reflected on the security of society as a whole.

Another thing is: the economic aspect that is based on work, production and perfection. Therefore, our religion urges us to work, and to perfect our work, as the Almighty Allah says, “Say [Prophet], ‘Take action! Allah will see your actions- as will His Messenger and the believers.” Allah, the Almighty, also said, “Do good to others as Allah has done good to you. Do not seek to spread corruption in the land, for Allah does not love those who do this.” The Prophet (PBUH) said, “Allah loves that whenever any of you do something, you should perfect it.” In this way security is achieved and the society will live in stability.

Another thing is: The establishment of values of solidarity and compassion among the people of society. Our religion has given special attention to this aspect through imposing Zakat, calling for charity, and the encouragement of endowments. Allah, the Almighty, said, “Those who spend their wealth in Allah’s cause are like grains of corn that produce seven ears, each bearing a hundred grains. Allah gives multiple increase to whoever He wishes: He is limitless and all knowing.” He (Glory be to Him) also said, “Whatever charity you give benefits your own soul, provided you do it for the sake of Allah: whatever you give will be repaid to you in full, and you will not be wronged.” The Prophet (PBUH) said, “If anyone relieves a Muslim believer from one of the hardships of this worldly life, Allah will relieve him of one of the hardships of the Day of Resurrection. If anyone makes it easy for the one who is indebted to him (while finding it difficult to repay), Allah will make it easy for him in this worldly life and in the Hereafter, and if anyone conceals the faults of a Muslim, Allah will conceal his faults in this world and in the Hereafter. Allah helps His slave as long as he helps his brother.” The Prophet (PBUH) also said, “He who has an extra mount should lend it to him who has none, and he who has extra provision should give it to him who has none,” and he continued mentioning other properties until we thought that none of us had any right to surplus of his own property.”

All praise is due to Allah, Lord of the Worlds; may Allah’s Peace and Blessings be upon Prophet Muhammad (PBUH), his companions and followers:

There is no doubt that achieving environmental security is one of the most important pillars of societal security through the development of the environment and protecting it from any damage or dangers, as the Almighty Allah said, “It was He who brought you into being from the earth and made you inhabit it.” The Prophet (PBUH) said, “If a Muslim plants a tree, or sows a field, and then men, beasts and birds eat from it, all of it is charity from him.”

How much we need to consolidate our efforts to achieve and maintain societal security through the integration of all State institutions, including the army, police, judiciary, family, education as well as the religious, cultural and civil institutions, so that all members of society can feel safe through their consolidated efforts.

O Allah, we ask You to keep the blessing of safety and security for us, the whole Egypt and all Muslim countries!